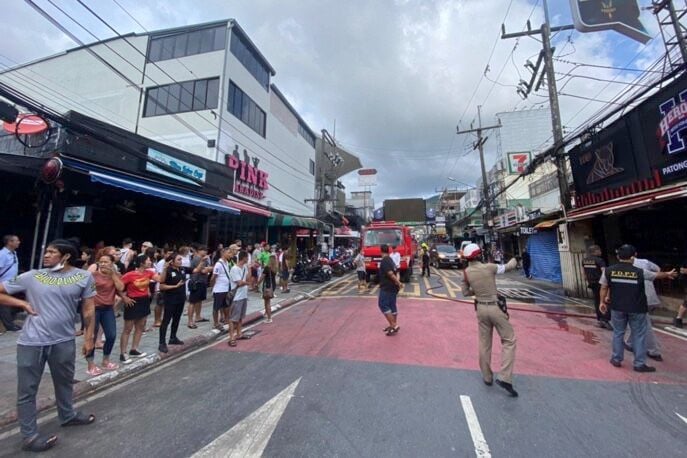 A fire broke out at a Patong bar on Thursday, at the tourist hotspot of Bangla Road. Firefighters rushed to the scene that afternoon to find smoke coming out of the bar. Firefighters reported that the incident was caused by sparks from a high voltage electric cable above the bar. Luckily, no injuries were reported.

A photo by The Phuket Express shows a crowd of people across the street from the bar watching as firefighters worked for almost an hour to bring the situation under control. The fire caused a huge power outage on Bangkla road for several hours. But firefighters said that even though the sparks caused smoke, there were no flames.

This news comes after another fire in Phuket gutted a house in the main city district earlier this month. The house was located near a mangrove forest, and the cost of damages was being estimated at 50,000 baht.

There have been a number of fires across Thailand this year, including another fire at a venue. The most recent notable fire was the blaze that ripped through Mountain B night club in Chon Buri province. The flames gutted the one-story glasshouse, that ha only one entrance in and out of the building. The death toll from the fire had risen to 17 on Thursday, and a total of 42 people were injured.