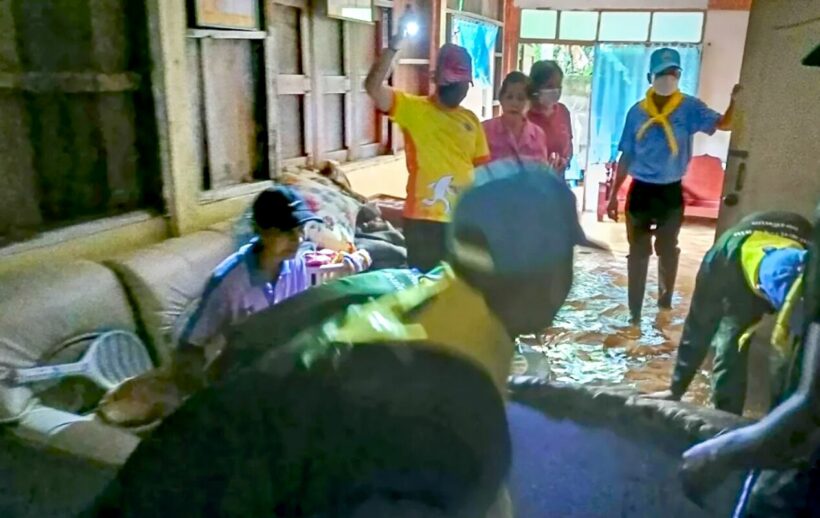 Along the northern borders of Thailand, rains have swelled rivers beyond capacity and caused widespread flooding. The Sai River along the Burmese border started rising on Friday and by Saturday morning the riverbanks burst and flooded a border town in the Mae Sai district of Chiang Rai, according to the Disaster Prevention and Mitigation Department.

Over 2,000 houses were flooded when the banks of the Sai River burst, pouring water into the Sailom Joy Market right at the border checkpoint between Mae Sai and Tachilek in Myanmar. Waters surged to over six metres deep under the bridges in the river, and neighbourhoods were drenched with water as deep as a metres in their homes.

People have been evacuated by way of six-wheel trucks and, in some areas, boats as military personnel joined local officials in rescue efforts. Sandbags were laid along the riverbanks in hopes of fortifying the shores and avoiding any further water dumping in and exacerbating the flood. People were rescued from their homes and even from the market as shoppers became trapped by floodwaters.

Across the border, on the Burmese side, the Tachilek market mirroring Sailom Joy Market suffered the same flooding as on the Thai side.

Chiang Rai has suffered flooding around the province with 206 villages reporting at least 1,081 homes have been affected by the heavy rains and overflowing rivers. A total of eight districts have reported floods in the province:

Across the northern region of Thailand, tropical storm Mulan has wreaked havoc, sending flooding waters to at least 2,312 homes in 410 villages throughout 11 different provinces over the weekend, according to the DDPM.

On the bright side, though, no deaths or serious injuries have been reported anywhere in the north as a result of flooding or heavy storms.