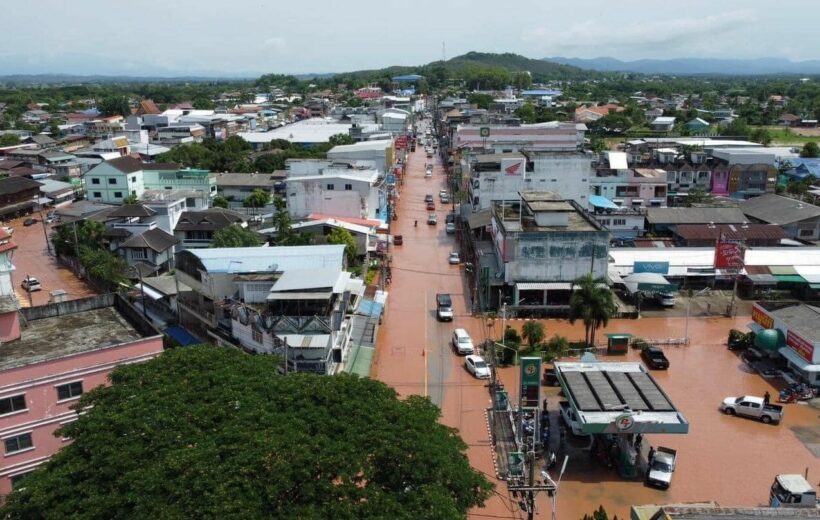 The flooding situation in easing in the northern province of Chiang Mai, but getting worse in neighbouring Chiang Rai. That’s according to a Thai PBS World report, which says the levels in several Chiang Rai waterways have been rising steadily since yesterday, as a result of heavy rain on Saturday.

The Chan River has burst its banks in Chiang Rai’s Mae Chan district, with markets and riverside communities flooded. Local officials and workers have built a temporary flood wall to protect the area. Meanwhile, the mayor of Chiang Rai’s Muang district, Wanchai Chongsutthamani, has ordered that the sluice gate be opened, allowing more water to flow into the Kok River, while water pumps are operating around the clock. Officials across 65 communities are currently helping affected residents.

Things are a bit better in Chiang Mai, where the floods have eased. However, some roads remain closed as flooding has made them impassable for vehicles. These include Chotena Road, before it reaches Lanna Golf Club, as well as Highway 2. Drivers are being warned to watch out for mudslides on mountainous roads.

Meanwhile, the route between Chiang Mai and Chiang Rai, prior to arrival in the district of Wiang Pa Pao, is badly flooded, making it impassable for small vehicles. Drivers are urged to use the Wang Nua-Phayao route as an alternative.

The rainfall is not over yet, as Thailand’s Meteorological Department warns of more heavy to very heavy rain today, for both the north and south of the country. The wet weather is the result of a low-pressure cell and monsoon trough over the north and north-east of the country.

Meanwhile, the strong south-western monsoon is affecting other parts of Thailand, including the Andaman Sea and the Gulf of Thailand. Rainstorms and heavy winds can be expected, with the north, north-east, central, and eastern regions, along with the upper south, in for some heavy to very heavy rainfall today.