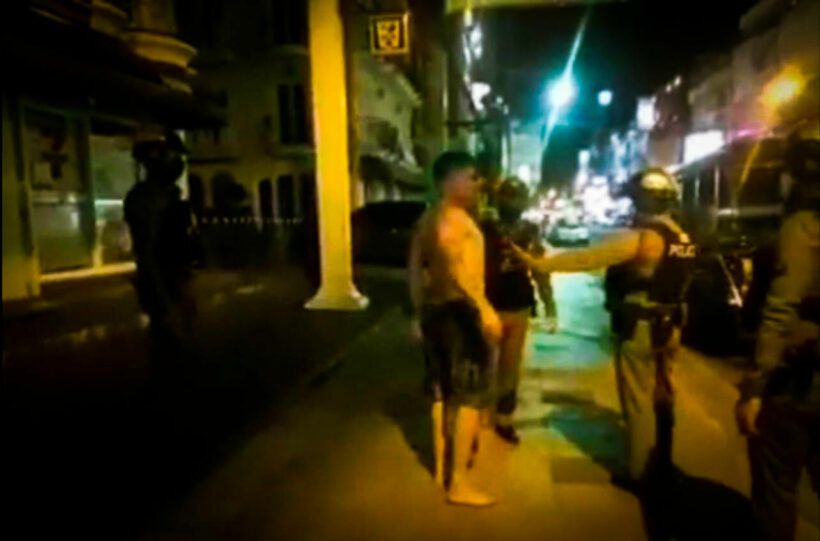 Police arrested a shirtless foreign man at a supermarket in South Pattaya between last night and this morning. The man allegedly harassed locals by shouting and trying to pick fights. Police say he seemed very intoxicated. They eventually arrested the man and brought him to the station to slap him with multiple legal charges. The man’s nationality hasn’t been reported yet, but he looks Caucasian, and between 35 to 40 years old. Police said the man didn’t cooperate, was aggressive, and threatened them.

Foreigners in Pattaya and other tourist cities in Thailand don’t exactly have the best reputation. In a 2016 article in the Bangkok Post, headlined “Farang behaving badly,” a writer reported that three Russian tourists threatened their fellow restaurant-goers, either as a prank or because they wanted to steal people’s belongings. The police didn’t charge any of the tourists.

The same writer reported another incident when two Australian backpackers “drank themselves into oblivion” at a hotel in Kanchanaburi. They didn’t have enough money to pay the bill, and the hotel owner called the cops. The backpackers were too drunk to explain themselves to the police, and had to be carried back to their rooms. When a policeman drove them to the bus station, the backpackers then pretended they were attacked.

The writer said, “Most of all, I’m ashamed two Australians have hardened the hearts of some very well-meaning Thais out Taling Chan way, who won’t be so generous the next time a tourist really does fall on hard times.”

Domestic vacationers, not international, will be majority of Phuket hotel guests