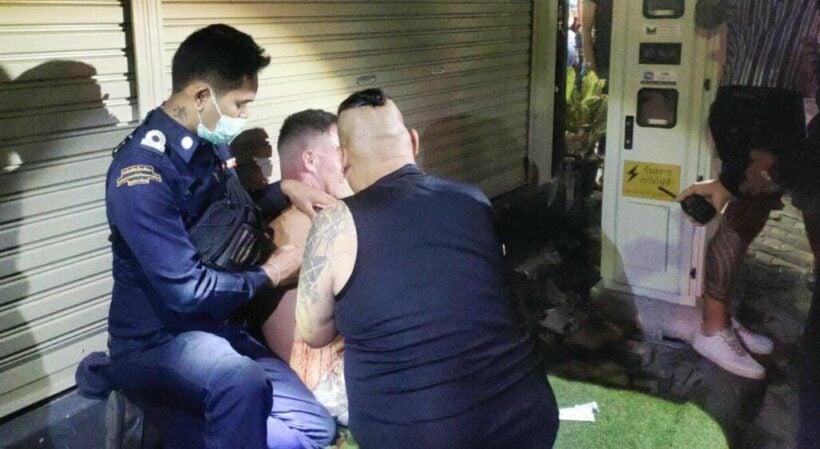 More scandal abounds near Pattaya’s famous walking street, a site of numerous late night scuffles. Between last night and this morning, 2 foreign men on a soi nearby the street got into a brawl which left one man with slash wounds. A witness said the men had gotten into a verbal argument, which escalated into a physical fight. They said one man then slashed the other man’s arms with a “sharp weapon” similar to a knife.

The man slashed made his way to Walking Street to get help, while the man who slashed him fled the scene. Even though the man slashed was heavily bleeding, he refused to go to a hospital, instead getting help bandaging his wounds from his friends. He also declined to file a police report, or speak to reporters. The man’s friends also decline to chat with reporters, and helped get their buddy home.

Even though neither of the men tried to bring the case to authorities, the brawl raised police hairs enough that police shut down all entertainment venues for the evening right after the incident. Now, police warn that the legal closing time of midnight will be enforced in the near future. Not many people are likely to take the warning seriously, considering that the curfew is expected to move to 2am, and 1am in some areas, starting July 1.

Police say they will review CCTV footage from nearby bars, and identify and summon all parties involved to the police station for further investigation.

Late night conflict around Pattaya’s Walking Street frequently makes headlines. In an incident that widely circled the internet last month, a tourist said security guards beat him bloody over a near collision when he was driving near the street.

The latest brawl between the 2 foreign men near Walking Street almost certainly won’t be the last.