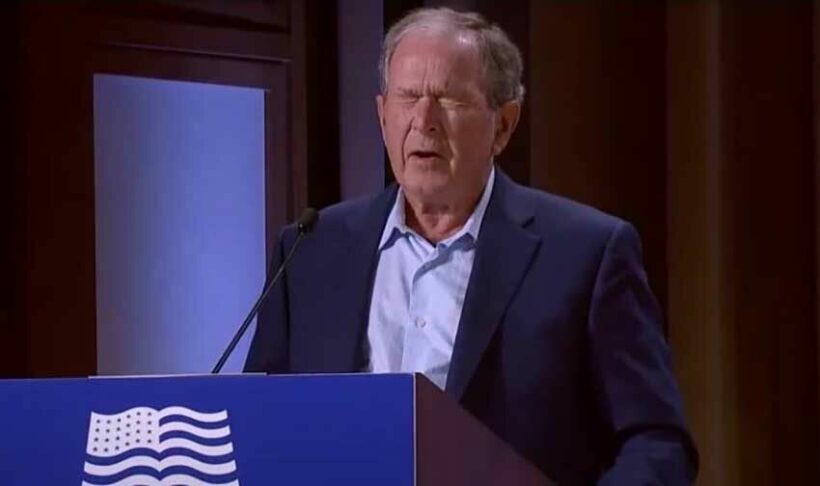 Doh! Is this the Freudian slip to beat all Freudian slips? Former US President George W Bush has accidentally referred to the invasion of Iraq as “brutal” and “unjustified”. The former US president was discussing Russia’s invasion of Ukraine, but instead of saying Ukraine, the wrong country’s name slipped out.

He swiftly corrected himself, shaking his head while the audience laughed, then throwing in a joke about his age. The gaffe happened while the former president was delivering a speech in Dallas, where he criticised Russia’s political system as rigged and undemocratic.

“The result is an absence of checks and balances in Russia, and the decision of one man to launch a wholly unjustified and brutal invasion of Iraq. I mean, of Ukraine.”

The slip is being seen by some as possibly revealing the former president’s true feelings about the invasion of Iraq. The 2003 offensive took place while Bush was president, with the US leading the invasion, under the pretext that Iraq had weapons of mass destruction. That theory has now been widely discredited, but the war that ensued claimed the lives of hundreds of thousands of people, displacing many more.

The latest gaffe from Bush has gone viral on social media, according to a Reuters report, garnering over 3 million views on Twitter, after a Dallas News reporter shared the clip.

During his speech, Bush also mentioned that he’d spoken with the Ukrainian leader, Volodymyr Zelenskiy, who he compared to Winston Churchill, who led Britain through World War II. By contrast, Bush condemned the Russian leader, Vladimir Putin, for his unjustified invasion of Ukraine.