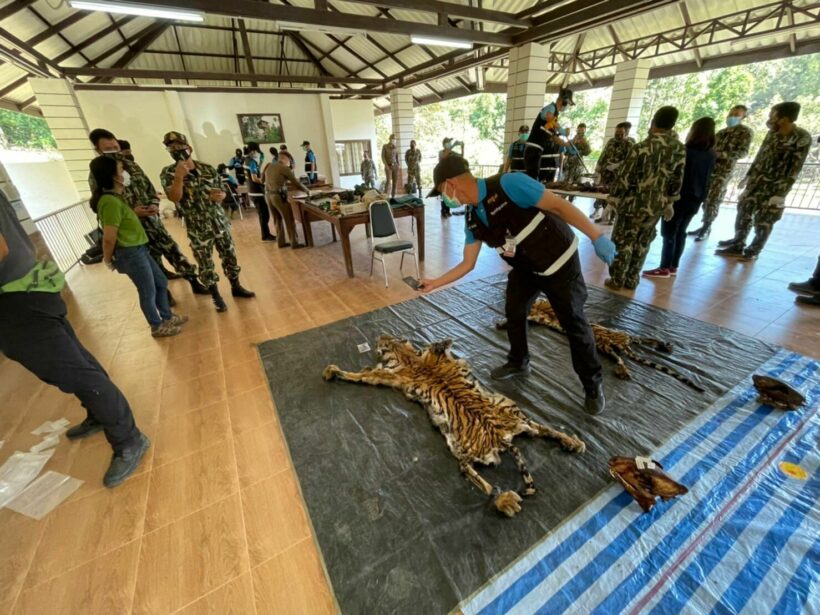 A group of four men are facing charges for allegedly hunting and killing two endangered Bengal tigers at a national park in Kanchanaburi, a western province bordering Myanmar. Thai park rangers got a report over the weekend that hunters were killing wild animals at Thong Pha Phum National Park near the border. Rangers found a camp poachers had set up with two Bengal tiger pelts strung up to dry and the tiger meat still cooking on the grill. When the officers approached the campsite, a dog started barking, giving anyone at the campsite a chance to flee.

The four alleged poachers surrendered to the police at Thong Pha Phum Police Station claiming that their motive is to revenge for their cows. They informed the police that they make a living by raising cattle, but 20 cows owned by them and other local farmers were killed by tigers over the past two months. They said that they didn’t know how to solve the problem. They allegedly used the dead cow meat as baits and killed two tigers. They reportedly insisted that there were no other motives behind this hunting.

The evidence seized by the police is included with the pelt of two Bengal tigers, tiger meat, four gunshots, and other tools involved with the hunting. During the investigation yesterday, the officers received a phone call asking back the gunshots that were seized from the suspects. The speaker claimed that those poachers borrowed guns from the speaker’s friend who work as a Civil Defense Volunteer before. The officials were searching to find a connection between them. After the investigation with the suspects today, they informed that they actually borrowed some guns from friends working as Civil Defense Volunteers, but it wasn’t for killing the tigers, just for protecting themselves.