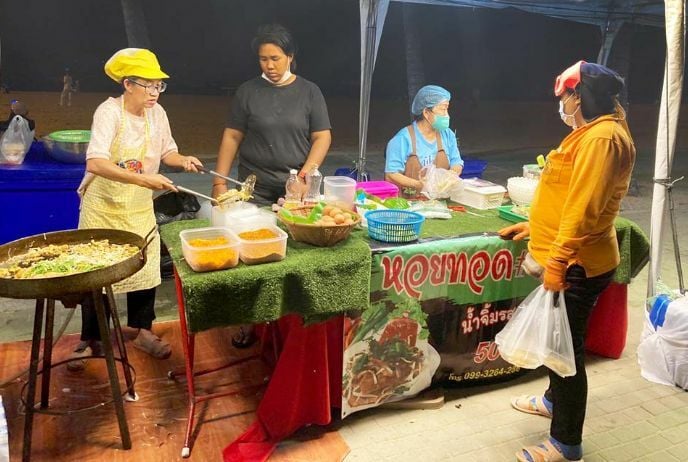 Music festivals are fun, but they often create heaps of trash. One Pattaya noodle vendor felt sympathy for some beach cleaners dealing with the mess from the Pattaya Music Festival this past weekend. So she decided to treat them to her noodles for free.

The vendor, 51 year old Walaiphan, said she had seen how hard everyone was working to clean up Pattaya Beach after the shows. Walaphan wanted to show the cleaners her gratitude. She added that she had been pretty successful at selling her Pad Thai and oyster omelets during the festival, so once the show was over, she decided to pay it forward with an act of kindness to the cleaners.

Prior to the Pattaya Beach concerts, authorities had urged festival-goers not to throw garbage at Pattaya Beach. People already litter at the beach sometimes, and City Hall regulatory officers had braced for heaps of garbage at the beach from tens of thousands of music lovers. They put up signs at the beach to remind people to throw their garbage in designated bins. Who knows how effective the signs were…

The dates and locations of the Pattaya Music Festival for the rest of the month are:

Entry is free. For more information about the festival, click HERE.