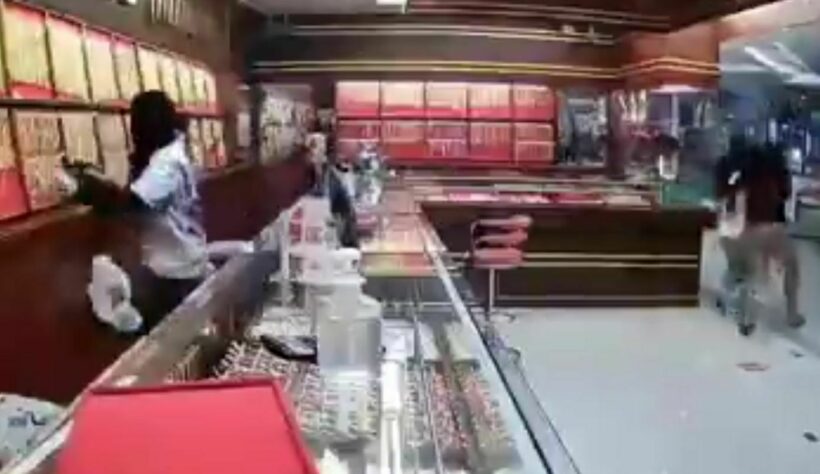 A daring armed robbery of a gold store in Khon Kaen has resulted in a manhunt with authorities now offering a 50,000 baht reward for any information that leads to the capture of the thief. The robbery took place at a gold shop within a department store yesterday evening and was captured by a security camera.

The footage shows a man dressed in jeans, a white T-shirt that says, “Why So Serious”, and a black hood covering his face wandering into the gold store located on the second floor of the Central Plaza Department Store in Mueang Khon Kaen District. The store was busy and none of the customers or staff seemed to notice him enter with a gun intending to rob the place. It wasn’t until he fired a single shot at the ceiling that everyone noticed him and scrambled to get away.

He then jumped over the counter, grabbed a handful of gold necklaces, jumped back over the counter and fired another warning shot. As people scattered in fear, he ran out of the store. There were no injuries to the customers or staff during the robbery. Another CCTV nearby captured footage of the robber fleeing and running in the direction of the city pillar.

The gold store released a statement saying the shop had recovered to operating normal business again after the flurry of police investigators, but the suspect is still at large. The Khon Kaen Provincial Police have offered a reward of up to 50,000 baht for any information that confirms and reveals the suspect’s details leading to an arrest.

In the manhunt so far, police picked up a man at a local market who they believed was the suspect in question. But after interrogating him and taking DNA samples, they didn’t have enough evidence to charge him in the case. He was released after the interrogation.

Glue sniffing man charged with murder for a temple beating