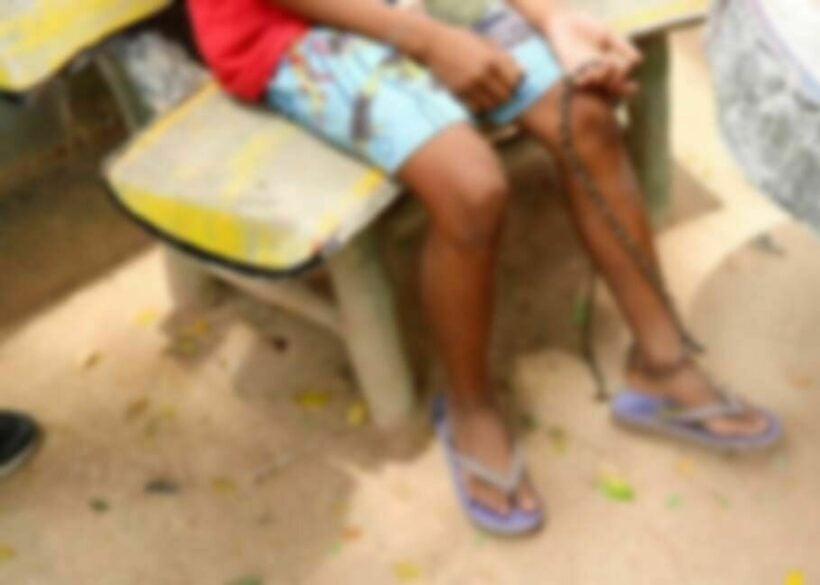 A couple from Buriram province, northeast Thailand, have admitted to chaining up their 11 year old granddaughter to a pole and beating her with a stick. Social services went to investigate at the couple’s house in Lam Plai Mat district today after a local man posted a video of the child, tied up in chains, on social media out of concern.

Officials from Buriram social services and officers from Lam Plai Mat Police Station rushed to investigate after seeing a video of the child with chains tied to her legs on social media. The child was chained to a pole at the house when they arrived at the scene.

The young girl – “A” [pseudonym] – told social services and police that her grandma and grandpa, who raised her since she was young, chained her up to stop her from going outside. A said that sometimes she gets lonely and wants to go out to play with her friends, but if she does, her grandparents will beat her with a stick when she gets home.

A said that her grandparents threatened her by saying if she removed the chain and snuck out of the house, they would bring red ants to bite her. A’s grandparents have also strangled her before, she told police. A told police that she was scared and in pain.

Both grandparents admitted to chaining up A to a pole to stop her leaving the house. The couple told police that A is stubborn and likes to run away when they go out to work, sometimes coming home in the dark. A kept escaping so they “had to chain her,” they said. Her grandparents said they chained her up for her own safety.

The grandparents told police that on one occasion, A snuck out of the house to play and was raped by a local 45 year old man named “Love.” The man tricked her by taking her to buy sweets before raping her, said her grandparents. A’s grandparents were so terrified it would happen again that they chained A’s legs to a pole to stop her from leaving the house when they weren’t in.

Local roast chicken merchant Chor Wanitklang told police he has seen the grandparents punish A many times before because A is “stubborn” and “does not obey” them. Chor said at first he did not want to interfere because it was a family affair, but when he saw A chained up to a pole, he wanted to help her. He had seen her chained up many times before finally deciding to intervene, he said.

Chor asked his son to take a video of A and post it on social media and ask the relevant agencies to help her. Even if the child is naughty, no child should be treated so violently, said Chor.

Social services said they will ensure that A is not treated like this again.