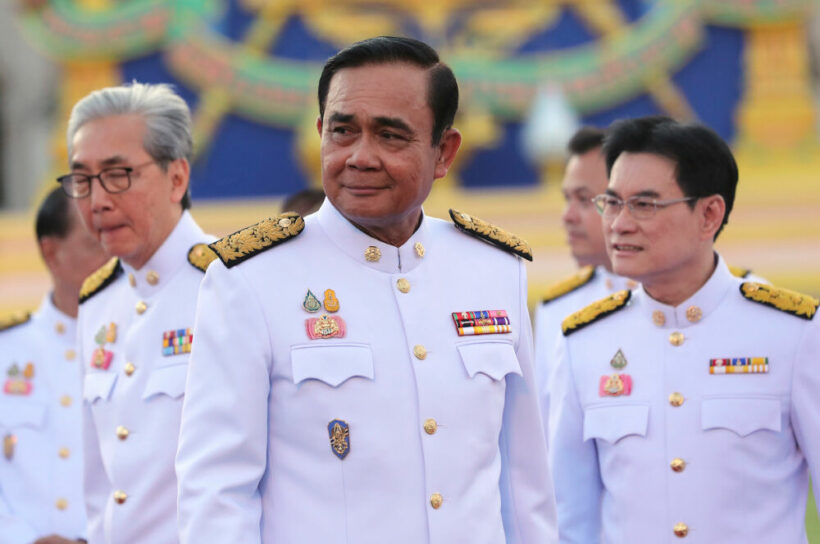 Yes, it was today, 8 years ago, today, when the elected PM Yingluck Shinawatra and her Pheu Thai government was unceremoniously dumped in yet another Thai military coup. The Thai army, under the pleasant name of the National Council for Peace and Order, argued that they had to seize power from the elected government to break a legal and political impasse. Whether it was an actual “legal and political impasse” or not is for Thai political scholars to debate.

Since 1932, when Siam changed from an absolute monarchy to a constitutional monarchy, there has been 20 charters, interim charters and constitutions, in each case either promoting greater democracy, or implementing changes whereby the military retain a strong say in the politics of the country. The first military coup happened only one year after the bloodless coup removed the absolute powers of the Siamese King. There has been a total of 18 military coups since 1932 (some of the coups have more successful than others and the actual number is debated in historical texts but ’18’ is a close guesstimate).

Before the 1932 revolution, the Kingdom of Siam had no written constitution.

Despite this seeming political instability, Thailand’s last 3 decades have seen relatively stable governance, sometimes by elected governments and sometimes by military governments. Business investment has continued and the tourists have kept arriving.

When the National Council for Peace and Order or NCPO seized power on May 22, 2014, the Army leader General Prayut Chan-o-cha, like other coup leaders before him, said the power grab was ‘necessary’. It was a largely peaceful coup with some pundits seeing it as a means to control the transition from the reign of the ageing and hospitalised King Bhumibol Adulyadej to his son, now HM King Maha Vajiralongkorn. King Bhumibol Adulyadej had been Thailand’s King from 1946.

Other scholars have just seen the 2014 coup as part of the cycle of Thaksin-inspired governments to a coup, to another Thaksin inspired government, to another coup, etc, etc. Thaksin Shinawatra was a divisive political who was the first to empower and numerically-weaponise the non-Bangkok sector, by far the most numerous electorate, and win successive elections. He was unpopular with the Bangkokians/military/royalists but continues to be a political power-broker, despite living in self-imposed exile outside of Thailand.

His sister, Yingluck was also ousted and forced to flea Thailand after a range of real or trumped-up charges over corruption in a rice-fledging subsidy were levelled against her and her Pheu Thai government.

In 2022 there is the real prospect of another Shinawatra, this time Thaksin’s youngest daughter, Paetongtarn Shinawatra, of becoming the main opposition party’s prime ministerial candidate for the next election.

The next general election is set to be either later this year or early 2023.

But coups in the past 30 years have also come as little surprise to Thais, who, whilst being weary of the cycle, usually accept the situation and get on with their lives. The 2014 coup followed weeks of sometimes-violent protests in pockets of Bangkok but it was hardly a ‘national crisis’. Most tourists at the time were surprised by the announcement of the coup having noticed nothing whilst traipsing around the capital.

The 2014 coup leader was also cut from a different cloth than in the past. Often called Uncle Tu by Thais, Prayut Chan-o-cha had a softer approach and even penned the words to a song for the coup “Restoring Happiness to Thailand”. Not many military coups around the world have a power ballad written for them…

Radio and TV were required to play the song at the top of the hour for many months. It also topped the charts at the time (well, given the enforced airplay, that was hardly a surprise). It was a coup “with feeling”. Uncle Tu took a generally soft stick approach to running the country and slowly packed away his Army uniform and took on the role of prime minister in civilian attire, donning the more western suit and tie, and occasional Thai silk jacket.

Apart from earning a reputation for a short fuse at media conferences, fielding those ‘difficult questions’ from Thai media, he grew into the role. Used to barking orders as the Thai army chief, he now had to soften his approach and take on a more consultative approach with his detractors.

Although not running as a candidate in the 2019 general election, the new constitution, that the NCPO penned, allowed an ‘outside PM’ to be nominated and voted for by a joint-sitting of the Thai parliament if no single party earned over 50% of the vote.

Given Thailand’s fractured political landscape, it was always virtually impossible for any single party to achieve 50% of the vote. Of course, having a hand-picked (by Prayut), unelected Senate, was always going to help! Prayut happily accepted the nomination, the stacked parliament voted and Prayut became the ‘real’ PM in 2019.

Thais will go to the next election within 12 months. The signals for a change are all around, not the least the election today of a new Bangkok Governor where a former Pheu Thai (opposition) politician and transport minister is the hot favourite to win. The candidates fielded by Bangkok’s conservative forces have polled woefully, including the incumbent, NCPO-appointed governor Aswin Kwanmuang, who has served in the position for the same 8 years. Aswin stood down 2 months ago to run as a candidate in today’s election.

Internally, the Palang Pracharat party, the party that was able to cobble together a working coalition and form government in 2019, is a tortured mess. After throwing some MPs out of the party for plotting against the current PM, others have defected and formed new parties. A forthcoming no-confidence motion in the Thai parliament may even see an undignified political end to Prayut Chan-o-cha’s term as PM before he even gets the chance to call an election.

The vacuum would be filled, short term, most probably by Prayut’s former sidekick, the loyal 77 year old ex-army buddy Prawit Wongsuwan. Prawit lacks Prayut’s charm but would be a ’steady hand on the tiller’ until the next election was called.

That an opposition party, or a coalition of opposition parties, will win the next general election in Thailand is guaranteed. With this possibility looming, the media have often asked the current Commander in Chief of the Royal Thai Army, General Narongpan Jitkaewthae, about prospects for yet another coup. When appointed in 2020, he made the traditional pledge to defend the country, the Buddhist religion, the monarchy and the people. But he also took a softer tone on the current protests around Thailand.

On the day of his appointment he was asked by the Thai media if he could promise there would be “no coups under his tenure as Army chief”.

His response… “The chance of a coup is zero, provided no groups create conditions or violent conflicts that cause suffering. But zero chance is not good enough. We should make the chance of a coup less than zero. But to achieve this, everybody must get involved.”

So Thailand, with or without Uncle Tu at the helm of the goodship Thailand, moves into another period of potential instability. But, as on May 22, 2014, if there was another coup down the track, despite the current Commander in Chief’s denials, most Thais will barely bat an eyelid and the food vendors will open up the day after, along with the rest of the Thai economy.

Police under investigation in central Thailand after viral video