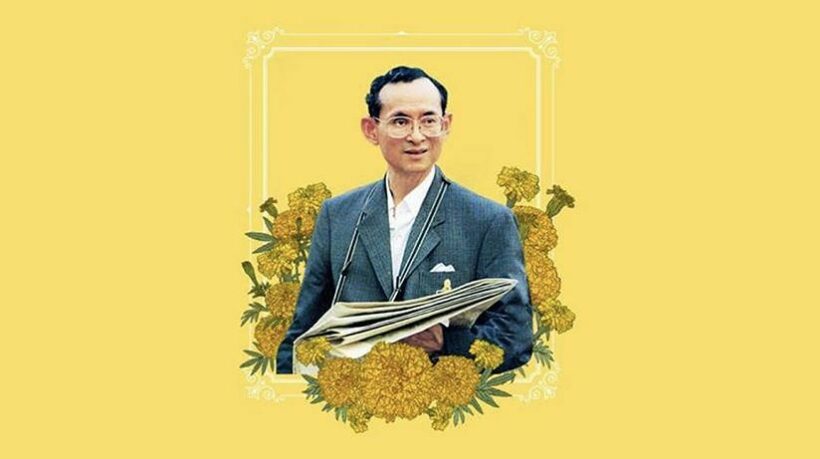 Today is Father’s Day in Thailand. As it falls on a weekend, tomorrow, Monday, December 6, will be a public holiday around Thailand. December 5 is the birthdate of the former Thai King Bhumibol Adulyadej who, even though passing away in 2016, still has his birthdate remembered each year as the national Fathers Day.

Today, King Maha Vajiralongkorn and Queen Suthida laid a foundation stone for a statue of King Bhumibol Adulyadej The Great at a new public park to honour of the late King. The new park is expected to be a popular new homage to the late King who reigned over Thailand for just over 70 years and was immensely popular. The park is located in the same are as as the Temple of the Emerald Buddha and the Grand Palace.

“The legacy of His Late Majesty King Bhumibol Adulyadej remains in the hearts of the Thai people. A new public park in Bangkok commemorating the royal contributions of His Late Majesty is set to open on 5 December.” National News Bureau of Thailand.

As Their Majesties arrived at Sanam Luang yesterday, yellow-clad crowds were waving Thai and royal flags, also yellow, whilst cheering “Long live the King”. The colour yellow has long been associated with the former King and celebrations for the Royal Family of Thailand. His Majesty led a candlelit tribute to his father, in the shadow of giant banner depicting the late King in front of the Grand Palace.

Since King Bhumibhol’s passing in 2016, and the coronation of King Maha Vajiralongkorn, the revered institution of the Thai monarchy has evolved. Initially as a period of transition for the institution as there was a delay between the passing of Rama 9 before the coronation of Rama 10, 2 and a half years later.

The new Thai King has also spent extended periods overseas and not been as active at public appearances, compared to his late father who was well known for appearances at public ceremonies as well as his travels around the Kingdom during the height of his reign.

Then, as Thailand was gripped in the early phases of the Coronavirus pandemic, a new swell of opposition to the Monarchy appeared from new, younger and educated voices at the campuses of Bangkok’s universities.

In July 2020 there was a public reading of a 10 point manifesto, laying out (well, demanding) changes to Thailand’s constitution and the codifying of its relationship with the Head of State. The issues, perhaps earlier only muttered in certain circles, were now being public announced. And reported. For the first time Thais were openly discussing issues surrounding the country’s highest office.

Since then the strident young voices have been met with force, sometimes brutal, from riot police at large rallies, mostly in Bangkok. Thai authorities have also invoked draconian laws in an attempt to quell the dissenting voices, under the umbrella of an Emergency Decree which continues until at least the end of January next year.

The matters have also been forced into hasty debate in the Thai parliament with proposed amendments to the 2017 Constitution failing. Thailand’s ruling coalition remains loyal to the Thai monarchy and has had the numbers to stifle debate about the sensitive issues.

The situation remains simmering whilst the Government slowly reopens the country and eases restrictions to the assembly of crowds. It is expected that the protests will continue as restrictions ease, although many of the leading activists who led protests over the past 17 months remain in custody. Even in the past week at least 12 protest leaders have been officially charged with lese majeste, Section 112 of the Thai criminal code, and could face long prison sentences if found guilty.

Australia, Asia, and Africa deal with the Covid-19 Omicron variant