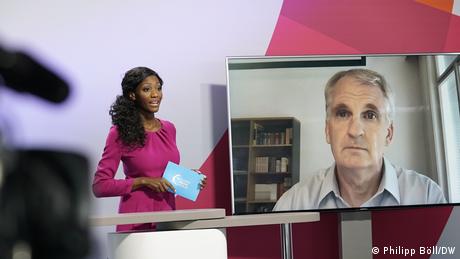 When democratic principles are chipped away, what does it look like? Whether it’s the apparent hijacking of a plane to detain a critical journalist or arresting opposition leaders, the disruption of democracy is consequential and often punitive. So as technology and the media evolve, particularly in the digital age, such a powerful platform also has its vulnerabilities.

Timothy Snyder, a history professor at Yale University and best-selling author, spoke Tuesday about disruptive democracies and the media at DW’s Global Media Forum and opened with a historical note. “It’s always the case that new media caused tremendous disruptions. The media that we think of as calming and relaxing and democratic — like the book or like the newspaper — took decades or centuries to create. The printing press when it was invented, led to 150 years of religious war,” said Snyder, who spoke via video link from Austria.

“So the historical point is that new media takes time to shape and that we as humans have the ability and the right to shape them. The internet, in other words, doesn’t have to be the way that it is now. It will take some other form and that form depends upon us.”

Snyder’s forum address did not catalog leaders who have disrupted national democracy — but he listed various issues that played a role in the disruption — including equality, knowledge and cognitive skills. Although his 2017 book “On Tyranny: 20 Lessons from the 20th Century,” which became a bestseller, was originally written as a Facebook post to get the “crushing despair” off his chest after the 2016 election of US President Donald Trump.

Snyder has long encouraged the need to read books and newspapers — and this was again underscored on Monday when he was asked why so-called traditional media, or printed media, is important when considering disruption and innovation, with the historian challenging viewers to reassess and even “recycle” what disruption represents in the media today.

“At this point, the idea of a local newspaper is disruptive — the idea that we should all have iPhones and be on the internet, that’s not disruptive. That’s the status quo,” he said. “I would even say it’s reactionary. It’s certainly not the future; it’s the present.”

“People need to know what’s happening with their schools. People need to know whether the water in the local river is polluted. When people look at the newspaper, whether it makes them happy or not, they have to have the feeling that this is part of the texture of their own life,” he explained.

Absence of local news may lead to polarization

Of the range of issues listed, fixing inequality is the most difficult to achieve, says Snyder. But boosting local journalism may be the easiest to correct. For the historian, it’s critical that young people have tangible access to the news that directly affects their lives while growing up — and this requires local reporters writing about the issues that directly affect their community. “This is so extraordinarily important because if people don’t have local newspapers … then they distrust what they call ‘the media’ their entire lives. If there’s no connection to the local, then people immediately skip to the national, or to the international, or to the realm of conspiracy.”

The Yale professor, who grew up in the American Midwest state of Ohio, says local journalism is especially crucial for people who grew up in a “news desert” as he did, a makeup that includes most of the US. “Most of the counties in the United States have no proper newspapers reporting the news. And when you lose that, you feel the vacuum. You feel the polarization that arises from that as people go upward into levels of things where they don’t really know what they’re talking about — and where they’re drawn into two opposing camps.”

The history professor and permanent fellow at the Institute for Human Sciences in Vienna hinted that journalists avoid, when possible, consistently reporting with a Doomsday tone.

Snyder said these are not issues that the newsrooms can solve — but there are other ways to contribute, such as trying to “help people think about the future in a calm, optimistic and non-disastrous way.”

But Snyder stresses that this is a balancing act, one that should of course still include investigative and hard-hitting reporting.

“I’m not saying just report the good news and make everything sound fine. I don’t believe in that at all,” he said. “I’m just trying to signal that if people don’t have some sense that the future is coming, then they’re not going to be attentive to the facts that journalists work so hard to report today.”

What can India gain from its ‘engagement’ with the Taliban?