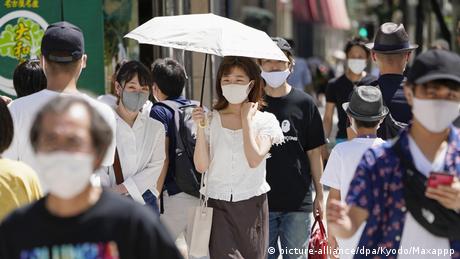 Soaring temperatures and uncomfortably high humidity levels have been among the biggest complaints from athletes taking part in the Tokyo 2020 Olympic Games.

And while temperatures have set new record highs in some parts of the country, most Japanese are fairly sanguine about the situation. They have, after all, both traditional and modern ways of beating the heat.

The Japan Meteorological Agency has announced that temperatures are dangerously high across the country and has placed virtually the entire Japanese archipelago under a heatstroke alert.

People are being advised to stay at home during the peak hours of sunshine, to drink lots of water to remain hydrated and have the air conditioning on at home.

Temperatures are significantly higher than in a normal summer in Hokkaido, Japan’s most northerly main island. The prefectural capital of Sapporo was selected to host the marathon and road walking races in the Olympics as it is around 800 kilometers (498 miles) north of Tokyo and normally five degrees cooler.

This year, the daytime temperature in Sapporo has repeatedly hovered around 35 degrees, the highest since 2000.

“When I was little, I used to live in Hakodate and there was no air conditioning then,” said Shizuko Utsumi, 74, a retired teacher who now lives in Sapporo. “The summers were still hot, so we used to wear ‘yukata,’ carry a hand fan and keep our doors and windows open all day.”

A “yukata” is a thin summer kimono typically made of cotton and with loose sleeves to allow the air to circulate.

“Another summer treat is ‘kakigori,’ or shaved ice that is served with flavored toppings,” she added.

Summer festivals will inevitably have a “kakigori” stall for visitors, while the men and women carrying the “omikoshi” portable shrine on its annual parade through the district will wet a decorated “tenugui” cloth, twist it until it resembles a length of rope and then tie it around their forehead to keep the sweat out of their eyes.

With the end of the rainy season in early July, many Japanese households also hang up “furin” wind chimes, usually made of decorated glass with a metal clapper that has a length of paper hanging below it to catch the breeze.

The sound of summer

“To the Japanese, the gentle sound of the furin is the sound of summer,” Utsumi told DW. “Of course, it does not have any effect on the temperature, but every time it chimes it reminds you there is a breeze. And that is especially welcome on a hot night when you are trying to sleep.”

Eating grilled freshwater eel is another traditional way of getting through the hot Japanese summer, with the fish — rich in protein, calcium and vitamins — believed to be an effective way of boosting stamina in the energy-sapping heat.

Major breweries have also traditionally released special summer beers, with many Japanese firmly of the belief that the very best way to keep the heat at bay is to open a can of ice-cold ale.

Inevitably, in a nation as gadget-obsessed as Japan, companies here are in fierce competition to develop new products that promise to keep consumers chilled.

Battery-powered personal fans are now a regular sight among people walking down a sunlit street, replacing the traditional hand fans of years gone by, while stores are selling gel-filled chillers that are cooled in a freezer overnight and then worn around the neck. Another take on that is the “ice ruck,” which has a similar gel pad that is fitted to the backpack before being worn.

Home furnishings stores have caught on to the trend and many are doing a roaring trade in pillowcases and sheets that incorporate vacuum-sealed moist packs that promise the user a better night sleep.

Major clothing retailers, such as Uniqlo, have also realized the need to provide the public with a wardrobe fit for the Japanese summer, with many releasing modern versions of the traditional yukata, but also ranges of loose and thin clothing that are also suitable for the workplace.

Japan’s Environment Ministry launched its first “Cool Biz” campaign in the summer of 2005 and has reprised it every year since, encouraging companies to permit their staff to dress more casually in the workplace and requiring that office air conditioners not be set below 28 degrees. Today, Cool Biz is the standard until the end of September.

“I never wear a tie for work anymore and in the summer months I now commute to my office in shorts and a T-shirt and get changed here,” said Ken Kato, the owner of a small business in Tokyo.

“I think the mentality of people has changed dramatically in these last few years as it is so much easier to work when you are comfortable,” he added. “Cool Biz is part of the summer and I think it would be impossible to go back to being more formal, like we were, especially for younger employees.”

Opinion: Iranian regime will stop at nothing to ensure survival