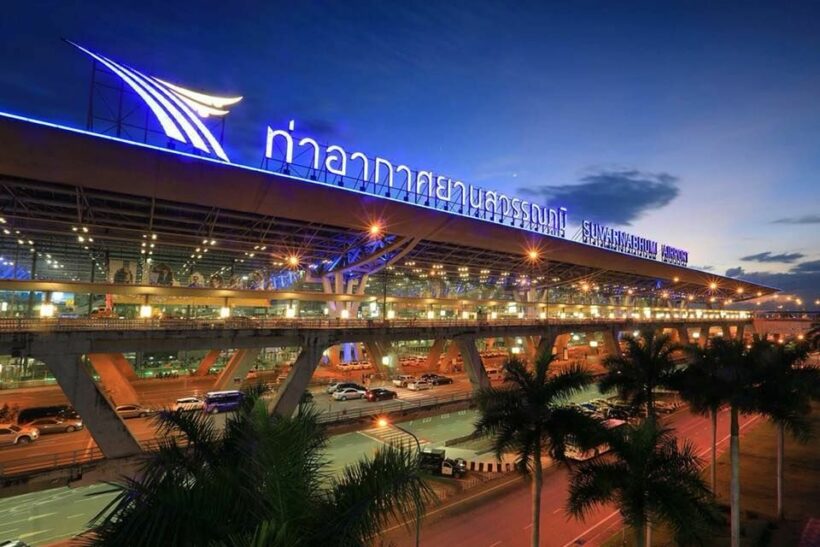 Suvarnabhumi International Airport is one of two airports in Bangkok, the other being Don Muang Airport. Suvarnabhumi is located in Samut Prakan, just south of Bangkok and it’s around 30 kilometers from the heart of Bangkok.

There are three ways you can get into the city centre: train, bus or taxi.

The best, and easiest way to get into Bangkok is to take the Airport Rail Link from Suvarnabhumi International Airport. It’s also the best way to return to the airport when your trip is coming to an end.

The train station is located in the airport’s basement and tickets can be purchased at the cash machines or counter from the staff. The train runs from 6am to midnight.

There are 8 stations in total, including the first and last stations, and it connects to two main stations, Makkasan, which is the fifth, where you can connect to the Petchburi MRT subway station. Phayathai station is the last stop, and it joins to the BTS Skytrain. It takes 30 minutes from Suvarnabhumi International Airport to Phayathai station, and the cost is around 45 baht.

Another option is taking a taxi, but we recommend downloading an app called Grab before you get on the plane to Thailand. It’s the equivalent of Uber. Taking one of the kingdom’s colourful taxis is debatable since they’re known for scams and overcharging foreigners. Also, the standard taxi has a gas tank at the boot and you may have trouble fitting all of your luggage in.

We don’t recommend a taxi during rush hour unless it’s completely necessary. There is a chance you will be stuck in Bangkok traffic for hours. Some hotels offer a shuttle service, so it’s important to ask if they can pick you up. This is a great option if you’re travelling with a large group.

Taking the airport bus to downtown Bangkok is the least convenient mode of transportation from Suvarnabhumi Airport, as the bus makes numerous stops along the way, increasing the duration to over an hour. However, for people on a tight budget, this is a good alternative. You can buy tickets from your bus driver, but make sure to use small notes as the driver might not have any change. You can find the buses on the first floor of the airport.

Our recommendation is to take the train. It’s fast, reliable, and affordable. It covers most of the main areas of the city.