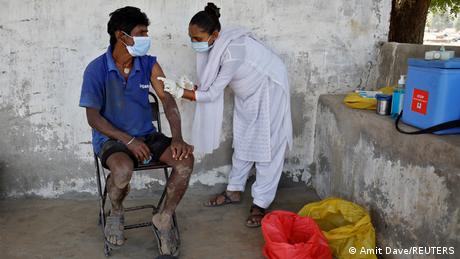 As India emerges from a devastating second wave of the coronavirus, experts have warned that the country’s slow vaccination drive and the easing of restrictions could soon lead to a third wave.

The vaccination campaign, which began in January this year, aimed to inoculate 300 million of India’s 1.4 billion people by August. But by May, India had only fully vaccinated 42 million, or 3% of its population, with about 14% having received the first dose.

When the campaign opened up to individuals aged between 18 and 44 in May, finding available slots for the shots became a challenge.

Faced with a scarcity of doses, many local governments, including that of the capital Delhi, resorted to offering only second doses of the vaccine until more stocks arrived.

In June, Prime Minister Narendra Modi made several changes to the country’s vaccination policy, including making it free for all adults.

India is expecting to produce enough shots to inoculate its entire adult population by December. But accessibility still remains a problem for many Indians, and even more so for the country’s rural population.

A study of official government data by the online news platform Scroll showed a huge disparity in the number of people obtaining vaccinations across regions.

Nine out of the bottom ten districts in terms of number of doses given were categorized rural areas. Meanwhile, wealthy urban districts such as South Delhi in the nation’s capital were at the top.

Private hospitals have also been offering paid jabs, but the number of such facilities remains concentrated in urban areas.

“Recent analyses have convincingly brought out the rural-urban inequities in the administration of the vaccine. The recent guidelines do recommend onsite registration in addition to the online option,” Rajib Dasgupta, chairperson of the Centre of Social Medicine & Community Health at Delhi’s Jawaharlal Nehru University, told DW.

“This is tampered by the shortfalls in human resources in primary health services,” he added.

In June, as part of efforts to make it easier for people to get vaccinated, India’s Health Ministry made initial registrations available through the government online platform CoWIN. But the platform was available only in the English language.

The government has mobilized social workers to raise awareness in rural areas where vaccination ratesare low.

“We need to enlist beneficiaries and mobilize resources. We are just assuming that people will show up to get vaccinated. People are hesitant, they are not anti-vaccination. Rural and urban areas have different concerns, and we need to engage with the people and address them,” Naveen Thacker, president-elect of the International Pediatric Association, told DW.

Many more men in India have received COVID-19 vaccines than women, government data showed on Tuesday.

Men account for 54% of the total number of those inoculated.

But Shyamala, a homemaker from the western state of Maharashtra, said the men in her family were vaccinated first due to the nature of their work.

“In our household, the men have received their first jabs. We are waiting for them to get vaccinated before, since they are the ones who go outside to work,” she told DW.

Thacker, who had been part of India’s polio vaccination campaign, said India could learn from its past success in combating polio.

Following a successful vaccination campaign, India was declared polio-free by the World Health Organization in 2014.

“During the polio vaccination program, the process was decentralized. There was support available at every level. There are a lot of lessons that can be learnt from our own success,” he said.

“It is important to be flexible in our approach. One size does not fit all,” he added.

Why are sanctions against Belarus not more effective?