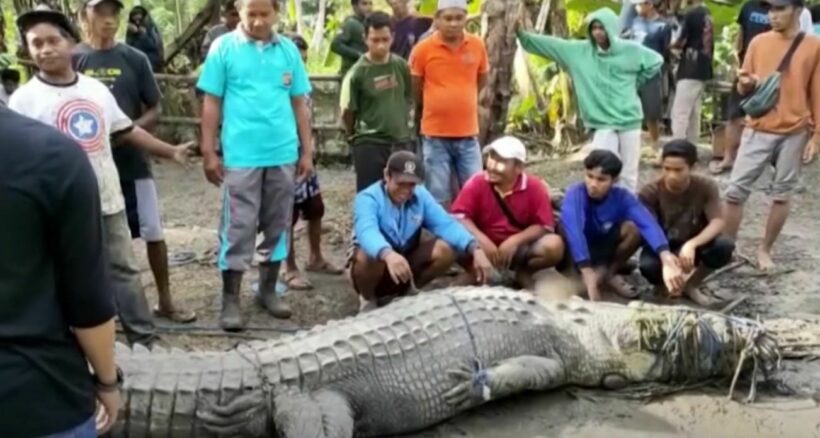 An Indonesian villager has caught a massive crocodile using only a rope on the island of Sulawesi. A video shows the villager, 53 year old Usman, pulling the rope on each side of the crocodile’s mouth. Later, the giant croc is seen with its mouth and claws completely tied up.

The beast was discovered to be 4.3 metres long. But courageous Usman said he had to capture the croc to prevent danger for locals. He said that if he hadn’t caught it, it would have crawled up drainage channels around roads where locals fish. Usman said people wouldn’t have been able to get into rice fields.

“It would have been dangerous if it had crawled up the drainage channels. I had to take a chance.”

Usman’s neighbours have praised the capture, calling it heroic. One villager said that in the past, there have been several crocodile attacks in the area. The villager noted that Usman considered the croc a rare animal that should be protected, and not killed. Usman reported the crocodile to authorities, who plan to release it back into the wild, according to a conservation agency.

Across Southeast Asia, crocodiles get into human areas from time to time. In April, two locals in Thailand’s Chon Buri province were bit by a crocodile when they were searching for a monitor lizard in a lagoon. Out of nowhere, a crocodile snapped one local on the leg, and the other on their hand. As with the incident in Indonesia, Thai authorities deal with these situations by moving crocodiles to spots where they’re less likely to harm humans.