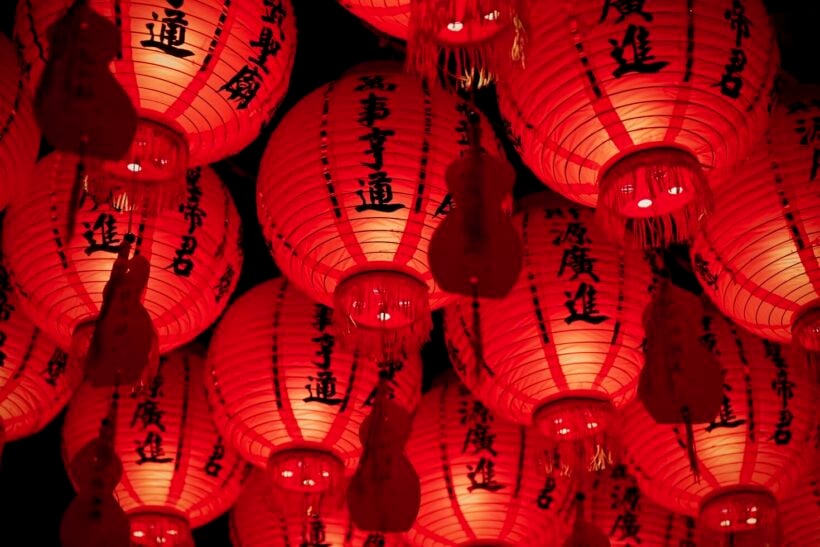 Chinese New Year is one of the biggest festivals in Asia. While most Westerners experience ‘Chinese New Year’ by watching parades in Chinatown and having a great meal, its traditions vary from country to country. Around 15% of the population of Thailand are believed to be descended from Chinese settlers who arrived in Thailand in the early nineteenth century. As a result, Chinese traditions such as the Lunar New Year (Wan Trut Jin in Thai) have been ingrained in Thai society. Before the Covid-19 pandemic, Chinese communities in Bangkok would come alive with music, dancing, and magnificently illuminated lanterns that colour the skies crimson during the Chinese New Year festival.

Despite the fact that large celebrations are banned this year to avoid the spread of Covid-10 infections, families will continue to practice their rituals. Some of the rituals include exchanging gifts, family union dinner and red decorations. Chinese New Year 2022 will fall on Tuesday, February 1st, 2022, beginning a year of the Tiger. From Chinese New Year’s Eve through the Lantern Festival on the 15th day of the lunar year, the festivities typically span around two weeks. Continue reading to learn more about the Chinese New Year celebration in Thailand.

1. Chinese New Year celebrations were born out of myth and fear

According to Chinese legend, the wild beast Nian (which is also the word for “year”) were attacking and killing villagers at the beginning of each new year. One day, people were able to scare the beast away by loud noises and dazzling lights. The monster Nian never showed up again and thus Chinese New Year celebrations were born.

Furthermore, the majority of people begin visiting their extended family and relatives to share a few oranges and ang pao and to wish them a Happy Chinese New Year.

Thai-Chinese people believe it is good luck to wear red or brightly-coloured shades on Chinese New Year. You will also see red decorations everywhere. This is because people believe that the red colour is meant to ward off evil spirits and bring wealth and good energy. Red lanterns adorn the streets, while red couplets and New Year images adorn the doors.

People believe in exploding firecrackers to scare away demons. There would be colourful traditional dances performed outdoors with the accompaniment of drums and cymbals, sometimes as a street parade. Yoawarat Chinatown is the main place in Bangkok where all the major events were held. The streets become beautifully decorated with red lanterns and colourfully-dressed dragon and lion dancers.

The dragon appears in many Chinese cultural festivities because the Chinese believe they are descended from the mythological beast.

5. Not allowed to sweep or clean house

According to an article published by Chulalongkorn University in 2020, “Thai-Chinese people believe that sweeping or cleaning the house during Chinese New Year will sweep their luck and fortune away, and money will leave the house.

However, there is a day for sweeping and cleaning to make room for the good luck that occurs before the Spring Festival.

6. People believe that you should not argue or curse anyone during this time

According to superstitions, saying nice things and being kind will bring joy and luck to you during Chinese New Year. People believe that swearing, saying words with negative meanings such as death, poverty, ghosts during the festival will bring you bad luck all year long. Furthermore, the word “sì” for “4” is also considered a bad word since it sounds similar to “death” in Chinese.

7. Families gather for a reunion dinner

Families gather on the eve of Chinese New Year to have a lavish supper that always includes pork, duck, fish, chicken, and, most importantly, dumplings! This is the most significant meal of the year, and it is known as the reunion dinner. Several generations of large families gather around round tables to enjoy the food and time together.

Most families would make a variety of symbolic “lucky” foods, but the one delicacy that is unquestionably the most popular is ‘Jiaozi,’ or wealth dumpling. Before the New Year’s feast, many families enjoy making the dough and fillings for dumplings together.

Many Thai-Chinese visit their ancestors’ graves the day before Chinese New Year’s Day, offering sacrifices to them before the reunion supper. This religious practice is based on the belief the deceased family members have continued existence and will bless the family in return.

Perhaps this is due to the fact that Thai-Chinese people feel more distant from their ancestral homeland, and hence the ceremony of remembering the past and previous relatives have greater weight here than in China.

So, here are some fascinating facts regarding Thailand’s Chinese New Year tradition. Although the Chinese New Year event has been cancelled this year due to the rising number of Covid-19 cases, the street will still be decorated with beautiful lights and Chinese lanterns. People will still go and visit Chinese shrines and worship, and pay respect to their ancestors as normal.

Thailand women’s football pressing on despite defeat by Philippines