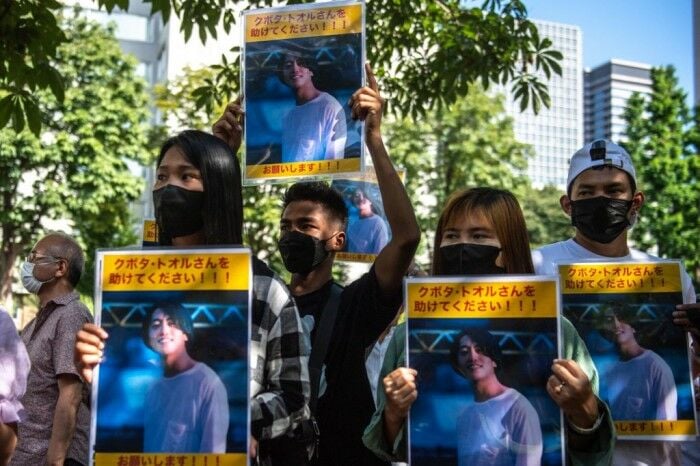 A Japanese documentary producer was imprisoned with two protesters after joining an anti-government protest in Yangon last Tuesday.

The media reported that Toru Kubota, a 26 year old male photographer and documentary filmmaker, was arrested at a protest in the South Dagon Township in the southeastern area of Yangon on July 30. The report said he was arrested while gathering information for his documentary.

An officer from the Embassy of Japan in Myanmar confirmed yesterday that a man was imprisoned with two Burmese protesters in Myanmar. The official said the man was questioned at a police station in Yangon, and the embassy contacted Burmese officials to request the man’s release.

The embassy did not reveal the identity of the man and didn’t confirm whether he was captured as part of the protest or not.

Kubota has produced a number of documentaries related to Myanmar. His most famous work is about the Rohingya people, named Light Up Rohingya. He has also produced several other features related to Burmese artists and religion.

This isn’t the first time Japanese journalists or media artists have suffered in Myanmar. Last year, Yuki Kitazumi, a Japanese journalist and the owner of a production house in Myanmar, was arrested on April 18 at his house in Yangon. He was accused of supporting a Civil Disobedience Movement and breaking visa laws.

The military government reported that details of Kitazumi’s case are being kept a secret to maintain a good relationship shared between Myanmar and Japan. Kitazumi was eventually released and travelled back to Japan on May 14. He also posted messages on Twitter requesting Myanmar to free Kubota.