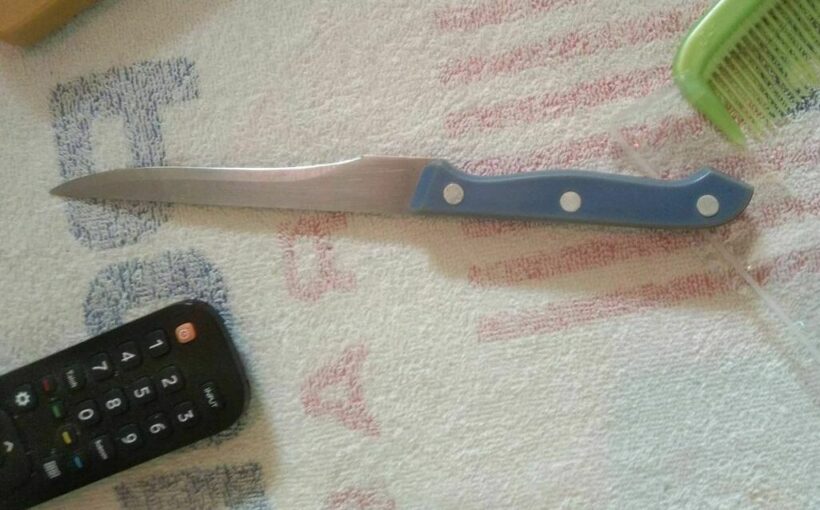 A Swedish man stabbed his own boyfriend in the chest yesterday at a condominium in Pattaya, Chon Buri province, after misunderstanding that he was having a love affair with another man. Police are still trying to track down the Swedish man, who went on the run after the attack.

At 5pm yesterday, Sawang Boriboon Foundation received a report that a man was seriously injured and rushed to the 14th floor of a condominium in Nong Prue subdistrict, Bang Lamung district to help.

Rescue workers found 49 year old Wichit [surname withheld] in a “critical condition,” with stab wounds in the middle of his chest and left side of his ribcage. Rescue workers gave him first aid and took him to Pattaya City Hospital.

Another man at the scene, 41 year old Lek [surname witheld], was also given first aid and taken to hospital to treat his injuries after he was hit with a “hard object” in the head, which was bleeding. Rescue workers found a 15 centimetre long fruit peeling knife on the ground.

Lek explained that him and his friend Wichit, who are just friends, were hanging out together at the condo yesterday. Lek said Wichit was taking a shower when his Swedish boyfriend entered the room. The unnamed Swedish man misunderstood that the two were having a love affair and saw red.

Lek tried to explain that they were just friends, but it was too late. The jealous Swedish man grabbed a knife and stabbed his own boyfriend in the chest several times. Then, he hit Lek with a “hard object” in the head and ran out of the room.

Officers from Pattaya City Police Station are investigating the incident but the perpetrators whereabouts remain unknown. Police are looking for him but fear that he will flea the country.

There is no news on Wichit’s current condition.