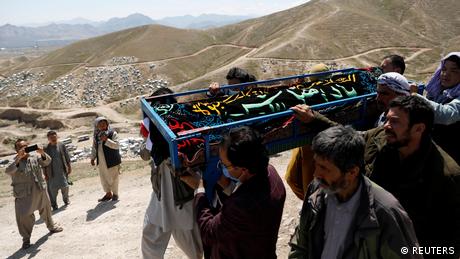 Violence against civilians has spiked in Afghanistan in the past few months. On Saturday, an explosion outside a girls’ school in Kabul killed at least 68 people — all of them civilians, with most being young girls between the ages of 11 and 15. The blast also left more than 100 people injured.

No group has claimed responsibility for the attack. The Taliban have categorically denied any involvement, as they are currently pursuing peace talks with Afghan authorities amid a withdrawal of US troops from the country.

But peace talks are not moving forward. The Afghanistan conference in Turkey has been postponed multiple times, and there is no sign it will take place anytime soon.

There is no clear agenda for the negotiations either. President Ashraf Ghani’s government and the Taliban have very different views on the future political setup for the country — the former unwilling to compromise on the parliamentary form of governance, whereas the latter demanding Shariah (Islamic law) rule in the country.

Amid all this chaos, and political bickering among Afghan politicians, foreign forces are packing their bags and will be out of Afghanistan by September. They are leaving behind a mess that will mainly affect common Afghans in the years to come.

Signs of this mess, and what lies ahead for most of the people in the country, are already visible. The Kabul school bombing is one of them.

Civilians are ‘an easy target’

“I was offering prayers at a mosque. When I returned home, people told me that my daughter was killed in an attack on her school,” Amina told DW.

Kamila’s father said the death of his daughter devastated him. “I was at home when I heard the explosion. I went to the school area to find out about my daughter. I found her corpse after five hours of search,” he told DW.

“It is easier to target and kill unarmed people. These attacks also have a bigger psychological impact,” he told DW.

“Such attacks increase mistrust between people and the government. They are most effective when the government is incompetent and corrupt,” he added.

Families that have lost their loved ones in the school attack are angry at the government. They say the authorities have failed to protect them.

“Schools are supposed to be safe places, but our children lost their lives even there. We don’t know what to do and where to go,” Juma Khan, who lost his niece in Saturday’s attack, told DW.

What can the government do?

Despite claims by some Western officials that Afghan security forces are strong enough to deal with security challenges, the actual situation is exactly the opposite.

“Afghan security forces are financially and militarily dependent on the US,” Mohammad Shafiq Hamdam, a Kabul-based security expert, told DW. “And, without its support, they will be in a tough spot.”

Experts say the withdrawal of foreign troops would leave Afghan civilians at the mercy of Islamists.

The Taliban are not the only threat to Afghan forces; militant groups such as “Islamic State” (IS) have also gained a foothold.

“The Taliban are stronger than ever. IS and other terrorist groups have gained a foothold in Afghanistan. Therefore, the consequences of a hasty and irresponsible withdrawal from Afghanistan could be dangerous not only for Afghanistan but also for the region and the world,” Raihana Azad, a member of the Afghan parliament, told DW.

The Taliban announced a three-day cease-fire on Monday to honor Eid al-Fitr, which marks the end of the holy month of Ramadan.

The Afghan government says the group must agree to a longer nationwide cease-fire so that intra-Afghan talks could resume.

“Americans are leaving, and there is no reason for Afghans to kill each other. I hope the cease-fire would be extended,” Mohammad Wali, a Kabul resident, told DW.

“Civilians suffer the most in wars. A few days ago, a bus was hit by a landmine, killing dozens of people. This needs to stop,” he added.

Most Afghans, however, are not optimistic about their future and say the school attack could be the beginning of a new violent era in their country.