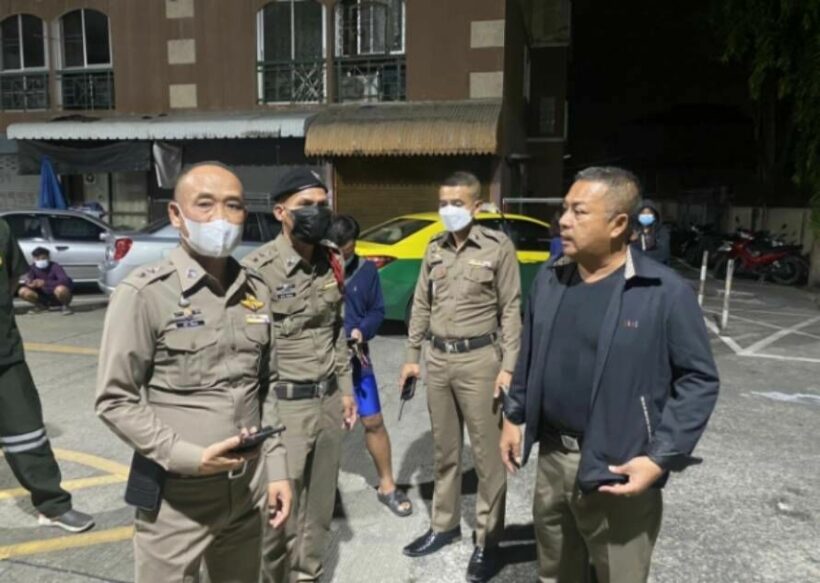 A Karen woman was found dead lying in a pool of blood outside of a condo building in Nonthaburi province yesterday at 11pm. Police said she had been stabbed in the neck with a knife.

Officers from Bang Bua Thong Police Station, doctors from the Institute of Forensic Sciences and rescue workers from the Ruamkatanyu Foundation were called to the scene outside a condominium building in Bang Bua Thong district at around 11pm yesterday.

The deceased has been identified as 23 year old Santimo [surname reserved] of Karen ethnicity. Police said she had one stab wound on the left side of her neck.

Santimo’s roommate told police that the pair had gone to the market together yesterday before Santimo decided to go home by herself. When the roommate returned home, the door was unlocked, and she wondered where Santimo had gone. She went out to look for her and found her dead outside, she told police.

The condominium’s security guard said two teenagers on a motorbike informed him of a woman lying in a pool of blood in the road, so he went to look, which is when he called the police. He said he didn’t see anyone else at the scene of the incident. He didn’t know the deceased as he has only been working there for about one month, he told police.

Police do not know who committed the murder. However, police have identified Santimo’s boyfriend, also of Karen ethnicity, as a suspect in the case. Police said they suspect it could be him from inspecting Santimo’s phone.

As Santimo returned from the market, located near the condo, she received a call from someone police believe was her boyfriend. Shortly afterwards she was found dead and her boyfriend “disappeared”, said police.

Police are investigating Santimo’s murder, which is difficult without any available CCTV footage.

Santimo’s body has been taken to the Institute of Forensic Science for an autopsy to be carried out.