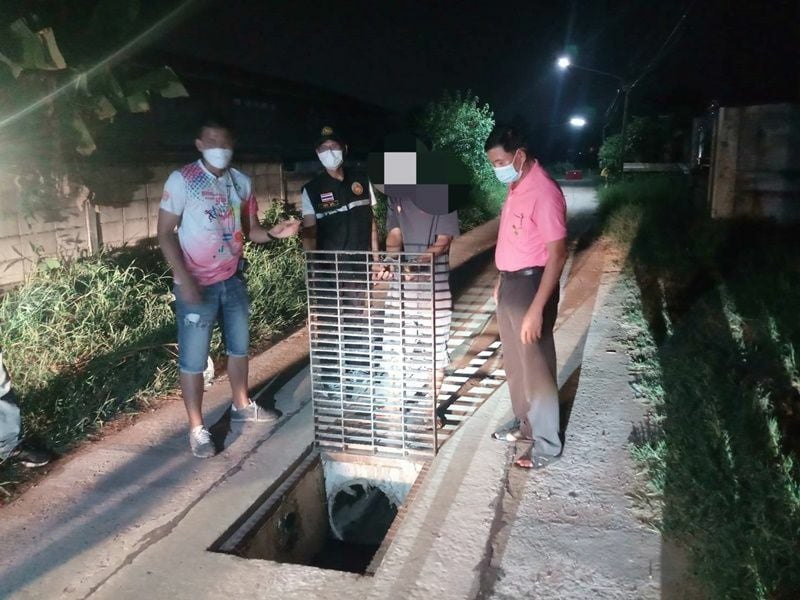 A thief from Kalasin province in northeast Thailand got a taste of his own medicine today after he stole a drain cover and proceeded to drive his pickup truck into the open hole. He was forced to request help from municipality officers, who instantly recognised him as the thief from CCTV footage, detained him and handed him over to the police.

Drainage covers kept disappearing from Yan Talat district in Kalasin province, causing many accidents involving citizens falling into manholes and cars getting stuck in the open drains. The disappearing drain covers compelled police to check CCTV camera footage, in which they saw the same man repeatedly stealing drain covers around the district and taking them away in his pickup truck.

Today, the authorities received a complaint from a citizen whose pickup truck had become stuck in a coverless drain and needed help getting it out. When officers arrived, they realised the man’s appearance and pickup truck matched that of the thief seen in the CCTV footage, especially in the most recent footage captured on May 6 outside a market.

The municipality officers detained 40 year old Wuttisak Phubanthat and waited for police from Yan Talat Police Station to arrest him. Police took Wuttisak into the station for questioning, where he admitted to stealing drain covers and selling them on for 500 baht a piece to pay for his household expenses.