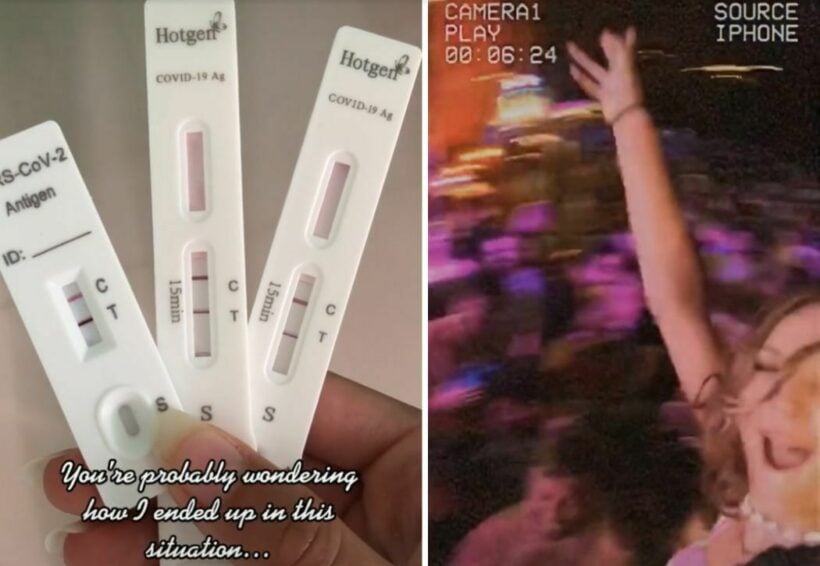 Did you go to the Full Moon Countdown on Koh Phangan? Take a test for Covid-19, if you haven’t already. Some people who went to the countdown event have made posts and comments on social media saying they tested positive for Covid-19. Several others say they got sick after the party.

One foreigner is in the spotlight after she posted a video on TikTok showing three antigen Covid-19 tests, all with positive results. The video read “you’re probably wondering how I ended up in this situation,” and then flashed to videos of her partying in crowds at the 2022 countdown event by Haad Rin’s Drop In Bar.

After criticism, with many saying she was irresponsible, the traveller wrote in a pinned comment saying “everyone who goes to such parties is aware of the risk! It’s my own fault!! Stay safe ppl.” Some people even commented on the video saying they were at the Full Moon Countdown and also tested positive for Covid-19.

Another girl who was also at Haad Rin’s Drop In Bar, but it’s unclear which night, posted a video of her positive Covid-19 test result and then videos of the party at the beach bar, which was packed with people around a fire jump rope.

While there has been hearsay that many people tested positive for Covid-19 after the Koh Phangan Countdown Event, the local health department has not reported a cluster of infections from the event. Today, the Surat Thani Provincial Health Department reports 3,630 active Covid-19 cases in Koh Phangan and neighbouring islands of Koh Samui and Koh Tao. These infections have been reported to or detected by health officials and confirmed with RT-PCR tests.

Hundreds of expats and foreign travellers flocked to Koh Phangan for its famous countdown event. The Raja Ferry at Surat Thani’s Donsak pier was packed with so many people headed to the island that around half of the passengers were sitting on the floor. There was no room for social distancing, and inside the ferry, there was little air ventilation. Proof of vaccination was not required and there was no Covid-19 check to get on the island. (There has been a check in the past.)

On the night of the massive New Year’s event on Haad Rin, officials from the Ministry of Public Health were at the main entrance to the beach, requiring partygoers to show their vaccination records or their Thailand Pass. The Thai government basically gave venues across the country a free pass for the night of New Year’s Eve, allowing restaurants and approved venues to serve alcohol until 1am on January 1, but under “Covid Free Setting” measures.

After the massive parties, taking an at-home Covid-19 test became the “norm.” Many people who went to parties have been posting their results from ATK tests on social media, like TikTok and Instagram. Some went to parties in Phuket and Pattaya.

It was a good night though✌🏼 #covid#newyear#thailand#fypシ