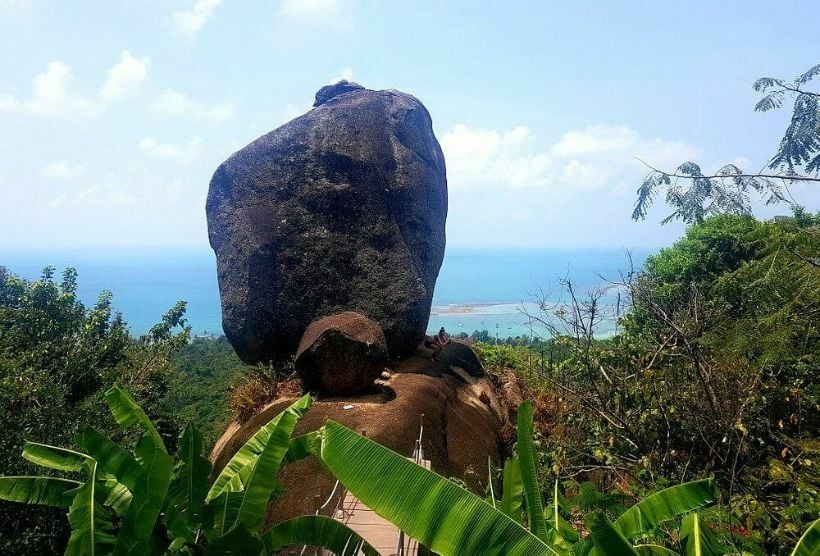 A tourist attraction in Koh Samui is set to temporarily close after officials inspected the site. Officials from the southern province of Surat Thani discovered yesterday that Overlap Stone viewpoint had been operating without a business operator license.

There was also no bridge construction license for the bridge that connects to the site’s giant rock mass. Now, the viewpoint is set to be closed until proper licenses have been issued.

The inspection followed an incident at the site that went viral in a January video. A Russian tourist filed a report to Borpud Police, accusing a caretaker at the site of physically assaulting her when she didn’t pay him the 50 baht entry fee. The 33 year old woman and her partner went to a local police station and reported that the man hit her on the cheek and rib.

A video shot by a bystander shows the tourist yelling at the 57 year old Thai man while her partner tries to break up the fight. It shows the two yelling back and forth at each other. In one part, the man throws an object at the woman, and she picks it up and hits him with it.

The tourists were driving a motorcycle around the island and decided to check out a popular viewpoint named Overlap Stone to take photos and watch the sunset. A Thai man was at the entrance of the viewpoint and asked for an entry fee of 50 baht (around US$1.50)

The caretaker said there was a sign informing visitors that the entrance fee is 50 baht. There are conflicting reports of how the physical fight escalated.

The Overlap Stone viewpoint belongs to a private business owner on Lamai Mountain.