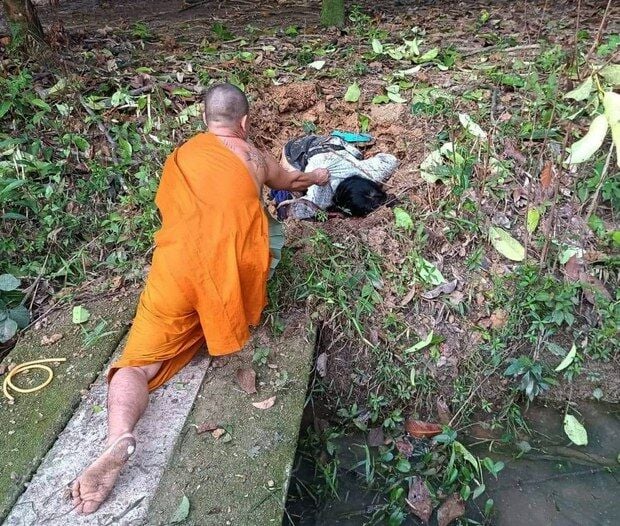 A soldier was killed and ten people were injured after two landmines were detonated at a rubber plantation in the Deep South of Thailand yesterday.

Of the ten people injured in the explosion at the rubber plantation in Kok Ko, a village in Narathiwat province, southern Thailand, six were police officers and four were civilians. The injuries to the police were not life-threatening but one of the civilians, a farmer, lost both her legs.

Prathum Nakthong was injured in the first explosion when she stepped on a landmine about 500 meters from her house in Kok Ko, one of the communities in Tambon To Deng, a village cluster in the district.

Capt. Panuwat Saidanil, a police investigator in Sungai Padi, revealed Prathum had just finished work and was returning home when she stepped on the mine. He added that the 55 year old woman remains in critical condition.

The first explosion went off at about 6.30am about 500 metres from Khok Kai village in tambon To Deng. Police, rangers, and a bomb squad were sent to the plantation. About 7.40am, while they were clearing the area, another bomb exploded, about 300 metres from the first.

Sgt. Somchai Daeng-ngern was killed on the spot in the second explosion as he was accompanying the bomb squad looking for landmines on the plantation.

Police Lt. Col. Wasant Panpoth, a crime suppression officer at the Sungai Padi station, reported Somchai and the bomb squad were walking to investigate the area when another landmine went off 300 meters away from the site of the first explosion.

Yesterday’s attack was the third deadly incident that Thai authorities blamed on rebel insurgents in less than two weeks since Thai government negotiators and representatives of Barisan Revolusi Nasional (BRN), the main rebel group in the Deep South, held their latest round of in-person peace talks brokered by Malaysia near Kuala Lumpur.

The Thai side asked the BRN to agree to a pause in violence that would cover large portions of the Buddhist Lent. The start of the 108-day truce would have fallen on Monday.

Gen. Kongcheep Tantrawanich, a Thai defense ministry spokesman, said they were going after the attackers.

“There has been more violence, an ambush, and bomb attacks, killing at least five people and injuring seven others. There was an ambush on a train. Such incidents have continuously caused a climate of fears.

“The prime minister has ordered the forces to catch the assailants as soon as possible.”

Picture courtesy of Benar News shows a monk trying to help Prathum Nakthong who lost both her legs in the landmine explosion.

CSD requeseted to take over Mountain B Pub fire investigation