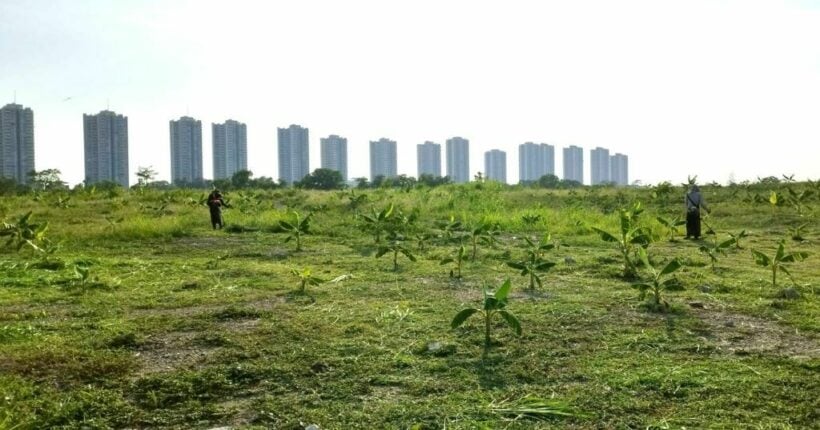 One of the biggest exhibition centres and event venues, Impact Arena, in the central province of Nonthaburi, basically just north of Bangkok, is showing off its large banana plantation on their official Facebook page. The page claims the CEO desires to increase green spaces for people, but Thai netizens have figured out it’s just a way the controlling company is avoiding land taxes.

The official Facebook page, IMPACT Arena, Exhibition and Convention Centre, has posted pictures of its 50 rai or nearly 20 acres or banana plantation. The page claims that the Impact Arena CEO had turned an empty land plot near Muang Thong Thani Lakefront into a “green space” with more than 10,000 banana trees last year. The page raved on about the “agricultural project increasing green space in Thailand,” and that the agricultural products (presumably bananas) would be a supply for Impact Arena’s kitchen and also for charity.

One of the candidates from last Sunday’s Bangkok governor election, Wiroj Lakkhanaadisorn, had mentioned a similar situation whilst debating with Thai media in the mead up to the election. Wiroj spoke about his policy to improve a welfare state for Thai citizens, saying the land taxed should be collected more equitably, especially from big business owners around Thailand. He gave land tax as an example. Wiroj said some landowners had tried to reduce the cost of their annual land tax, and pay at a lower rate, by turning their empty city land into an “agricultural area”.

Not long after the debate went viral on Thai social media this banana plantation on spare land at Impact stadium magically appeared. Some Thai netizens obviously jumped to the conclusion that the publicity about companies paying land tax led to the reaction from the owners of Impact stadium. Other netizens living nearby said they would wait to enjoy the bananas.