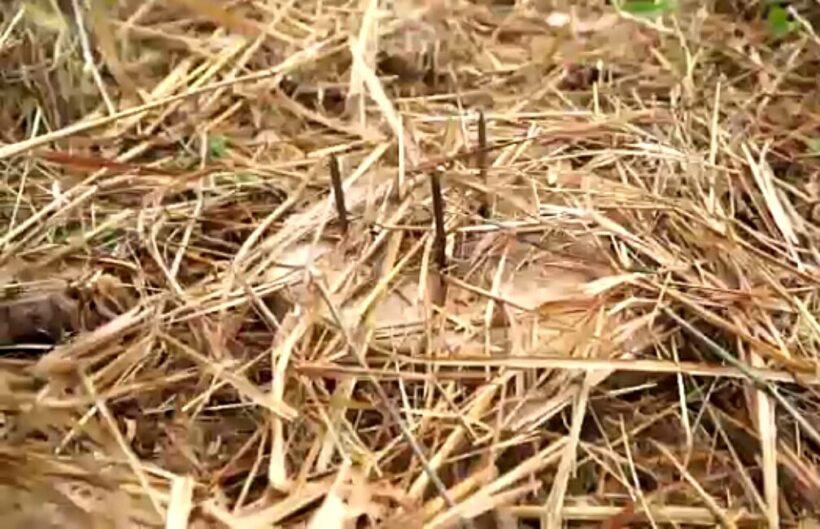 Officials from the Phu Luang Wildlife Sanctuary in Loei province filed a complaint with police about neighbouring villagers, accusing them of setting more than 100 elephant traps. The neighbours were alleged to have set the traps to protect their farms from elephants eating their crops. The sanctuary officials brought several of the elephant traps with them to the police as evidence.

In Thailand, the Wildlife Preservation and Protection Act bans the setting of animal traps with violators found guilty of the offence in court facing fines of up to 1 million baht and up to 10 years in prison. Green World Foundation said yesterday that they received a corroborating report that forest rangers had encountered over 100 crude elephant traps around the border of the wildlife sanctuary.

Villagers in the areas have farms where they grow sugarcane, which is a popular snack for elephants. The pachyderms are known to frequently wander from the sanctuary, scavenging for food and eating the farmers’ crops when they encounter the sweet sugarcane treat. Many locals use firecrackers to scare the scrounging elephants away, but officials say this is the first time they found traps in the area.

The simple traps were made by taking a round slice of a tree trunk about 30 centimetres in diameter and driving a half dozen nails through it, including rusty ones. Several of the traps have been found with bloodstains on them, indicating that elephants had stepped on them and been injured.

The local farmers are struggling as the traps they allegedly set are illegal and they face harsh penalties, but at the same time, their crops and income are being destroyed by meandering elephants. Forest officials have tried to convince farmers to change their cash crop from the sugarcane that attracts elephants to something safer like chilli or honey bees. Officials say most of the locals have tried to be flexible to live peacefully with the wildlife, but there are still some holdouts.