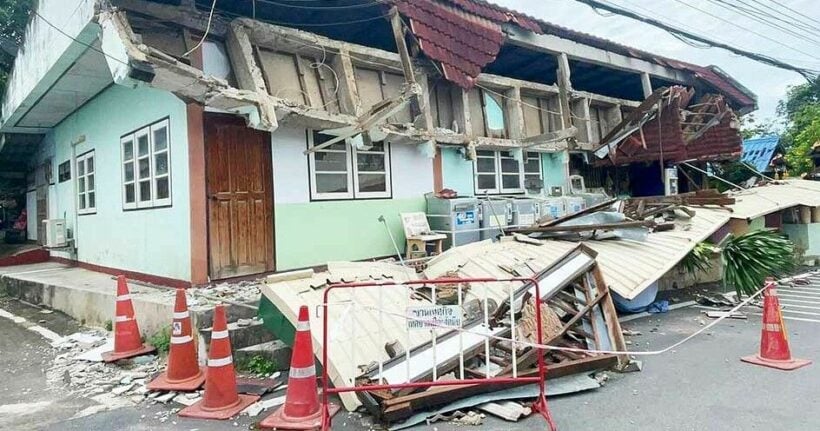 A man from Sattahip district in Chon Buri province saved countless lives on Saturday when he warned residents of a row of four townhouses on Soi Wat Noi road to quickly evacuate.

The alert neighbour, 50 year old Saneh Wongpoon, heard creaking noises coming from his ceiling and noticed a part of the roof caving in. The row of houses share the same concrete-enforced roof.

He shouted to residents of the other three houses to get out as fast as they could. People started flooding out the houses from both the front and back.

Moments later, the entire roof caved in as Saneh predicted, with heavy concrete beams smashing into the ground.

Had Saneh not have warned his neighbours of what was to come, the results could have been disastrous.

Poor infrastructure is thought to be one causal element behind the tragedy which occurred in the same district last week at Mountain B pub. A total of 15 people died and around 40 more were injured when a fire ripped through the cramped nightclub.

Shoddy or unfinished construction work continues to cause daily casualties and near misses in Thailand, whether it’s steel beams falling from the sky onto cars or pickup trucks driving head first into huge potholes.

On July 31, a U-turn bridge over the Rama II Road in Bangkok collapsed, falling onto four vehicles and killing two people.

Building collapses are especially common in Thailand’s monsoon season. On April 17, the newly-built service hall at Bangkok’s Don Mueang Airport collapsed during a thunderstorm. The hall is designed to hold hundreds of passengers, but luckily hadn’t been put to use yet, so no one was inside when the roof caved in.

Last week, a toll gate in Chachoengsao province in central Thailand collapsed during a storm. Luckily, no injuries were reported.