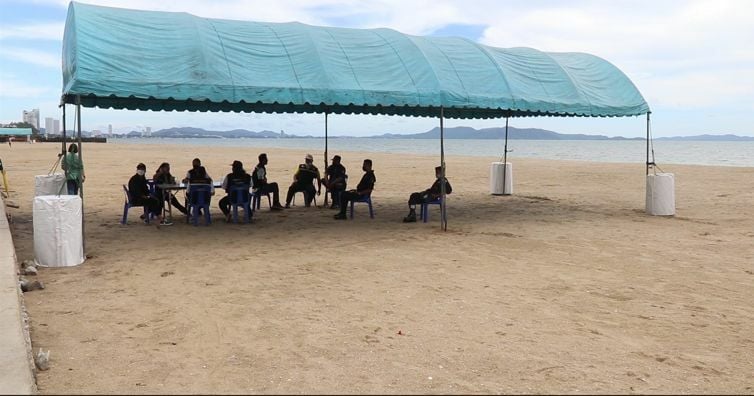 Locals around Pattaya’s Jomtien Beach are liking the new ban on vendors. Na Jomtien Municipality started enforcing the ban on Monday (June 27), barring all businesses from reserving spaces on the beach, sidewalks, and roads, to operate for personal benefits. Those who violate the ban could face a fine of up to 2,000 baht.

Now, locals are breathing a sigh of relief. They say that beachgoers can now relax in peace, and local residents don’t have to deal with noisiness. The locals said that on top of the noise, there also used to be conflicts between vendors fighting over areas, as well as traffic problems caused by the vendors.

After the ban was enacted on Monday, police and city officials went to patrol the beach. They have also posted signs warning vendors not to encroach on the beach area. Sattahip District Chief Chatchai Sriphoon said…

“We will use compromise first, but if the vendors still won’t listen, they will be charged under the Cleanliness Act and the Traffic Act.”

Last week, about 300 vendors protested against the ban at the Na Jomtien Municipality in Chon Buri province. The protestors said the ban would destroy their livelihoods. Permanent Secretary Kanpong Suwanpathumlert spoke to the vendors, pointing out that tourists who used to admire the beach’s beauty now complained about stalls on the walkway, unkempt tables and chairs, garbage, and traffic congestion.

The Na Jomtien Municipality is now studying vendor rules in other areas like Jomtien and Pattaya, in order to find a solution to satisfy both vendors and beachgoers. But until that solution comes, the total ban on vendors at Jomtien Beach remains.