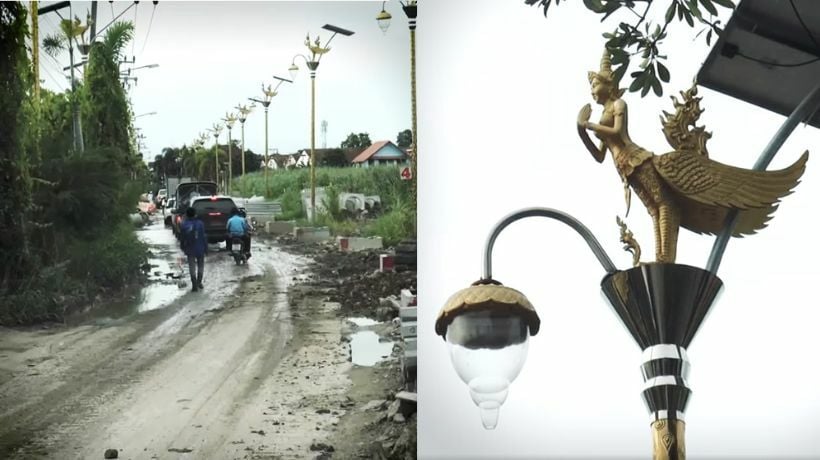 Locals from Nakhon Thong Village in the Racha Thewa district of Samut Prakarn, the central province of Thailand, have made an impassioned appeal to the media to highlight the provincial government’s neglect of their roads in favour of pretty street lamps.

Samut Prakarn provincial officers continue to ignore residents’ calls to improve the district’s dangerous roads and thoroughfares. The road construction, which was expected to be finished 3 months ago, is never-ending while the project to install fancy, pricey street lamps goes on.

Samut Prakarn provincial officers are still under investigation by the Office of The National Anti-Corruption Commission but a verdict has yet to be concluded. As a consequence, natives continue to grow restless.

Pictures of the district’s decorative street lamps are often shared on Thai social media. They usually feature mythical beings combined with traditional Thai figures, like Kinnaree, which is half woman and half bird. But the beautiful lamp posts contradict the area’s unkempt, dangerous roads.

Other local governments in Songkla, Sakaeo, and Mukdaharn, are all under fire over the same issue.

A number of the district’s street lamps are solar equipped, which should help save on the government’s electricity budget, but many see it as false economy because each lamp post is reported to cost almost 100,000 baht.

The road to the village is about 6 metres in width and 617 metres in length. The budget spent on the road improvement project, which began in March, is 7.4 million baht. There are 44 Kinnaree street lamps along that same stretch of road, which cost 94,000 baht each, totalling about 4.2 million baht. A quick search on the Boon Thaworn platform reveals you can buy a similar street lamp for about 13,000 baht.

A representative from Nakhon Thong Village, Somyong, told the media that he wanted officers from the Racha Thewa district to care more about its local residents.

The Chief Executive of the Sub-district Administration Organisation, Songchai Nokkamin, refused to a request by the media for an interview, and assigned the Director of the Provincial Public Work Division, Tanakrit Waipip, to provide more information.

Thanakrit said the construction couldn’t be completed according to the schedule because there is a problem with the locality’s waterworks system.

“The Metropolitan Waterworks Authority promised to complete the water system on the road within 2 days. So, the district office would extend the construction schedule for 3 months more.

“An officer will discuss with the community and land owners to offer a temporary road for locals to travel while waiting for the construction to be finished.”

Bangkok open-air film festival is free to moviegoers next month