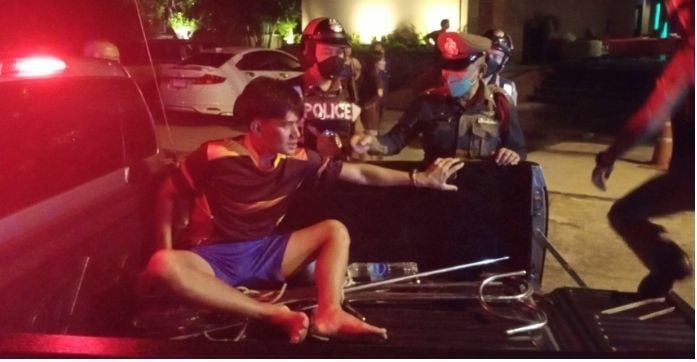 Yet another incident of violence has come to light in the Bang Lamung district of Chon Buri province this week. On Tuesday night, a man allegedly assaulted another man who he said mocked his girlfriend’s looks. A video by an eyewitness reportedly shows the suspect, 23 year old Kittithat Thongtae, and his girlfriend, charging at a motorcycle taxi rider and beating him, while others try to stop them.

After receiving an assault report, Pattaya police, with the help of a ‘good Samaritan’, caught Kittithat. Kittithat claims that the rider annoyed him by making fun of his girlfriend’s appearence. He added that anyone who insulted another person’s appearance should be physically attacked.

Police found the victim, 52 year old Chuchat Pansri, with several injuries. Kittithat is now in police custody for further legal processes. He was reportedly still extremely angry and yelling at onlookers when police arrested him.

Just one night before the incident, another man in Bang Lamung district allegedly pointed a gun at his ex-girlfriend’s face in the middle of a street. The 18 year old woman and her 22 year old sister say that on Monday night, the ex-boyfriend followed them on a motorcycle before he pointed the gun at her face. They say he brought up their personal history.

They say the woman begged her ex to stop, but he was “enraged” and began waving his gun in passerby’s direction. The man allegedly only drove off on his motorcycle when he realised someone had called the police.