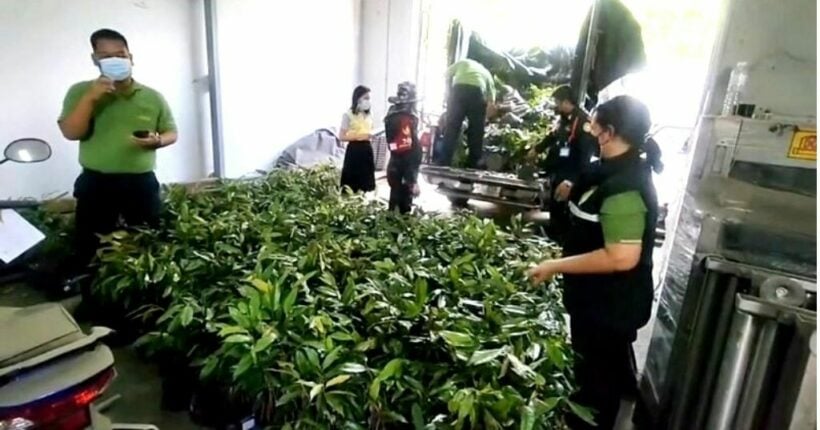 A Thai man has been arrested at the Customs Department’s border checkpoint in the northeastern province of Ubon Ratchathani. He was caught trying to deliver durian trees, valued at around one million baht, to a customer in Laos.

The Head of Chongmek Customs House at the border of Thailand and Laos, Wanlop Suiraksa, told Thai media that they received leaked information that the durian trees would be smuggled to Laos yesterday. While customs officers and police monitored cars and travellers at the checkpoint, they spotted a silver pickup about to pass the checkpoint to the Laos area. Then, they asked the driver to pull over to the side of the road for inspection because the rear of the truck was covered with a black plastic sheet.

The officers found 6,500 durian trees packed on the truck. The 21 year old driver, Narongsak Sichana, now faces charges of violating the Plant Variety Protection Act by smuggling preserved plants without permission. He could face a penalty of up to 1 year in jail, a fine of 4,000 baht, or both. The driver also violated the Customs Act by exporting restricted products without permission.

The driver told officials that he was hired to deliver durian trees to a Lao customer living in Pakse city. He said this Lao farmer had nearly 40 acres of plantation and ordered durian trees from Thailand at 150 to 200 baht each. He added that he did not know that delivering durian trees out of the country was illegal. He claimed that the person who hired him had already asked permission from the Customs Department.