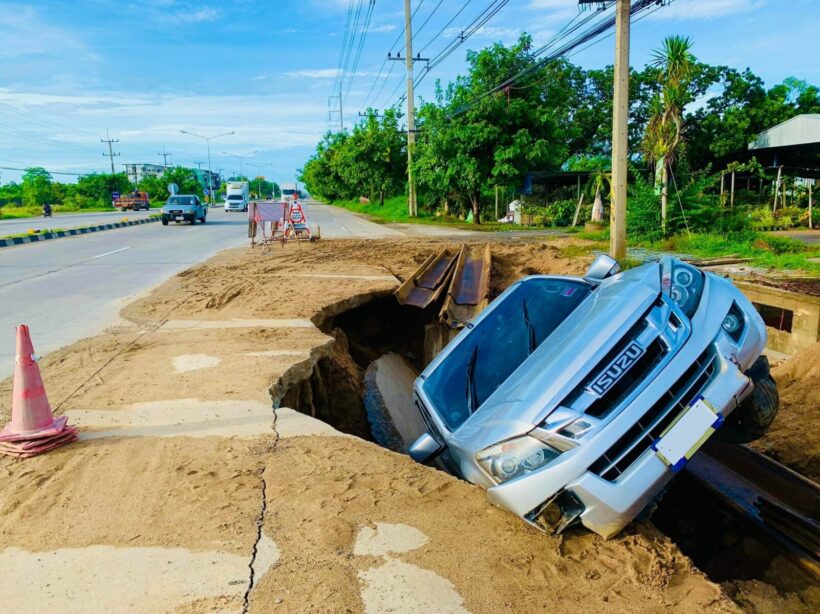 A pickup driver was lucky to escape with his life after his vehicle crashed into an unfinished water drain on a poorly lit road in Nakhon Pathom, in central Thailand.

The driver walked away from the accident relatively unscathed after his vehicle had careered into the ditch in treacherous rainy conditions.

The incident happened on the Malai Man Road in Kam Paeng Saen District of Nakhon Pathom at about 1am yesterday.

Residents living nearby informed the media that it was raining very hard on Wednesday night and into the early hours of Thursday morning. They heard the sound of a crash and dashed to find the pickup in the water drain. They helped the unnamed male driver out of his vehicle and sent him to a hospital with mild injuries.

Residents complained that the construction of the water drainage system should have been finished after a month but have dragged on for three months.

The Department of Highways project aims to lay 500 metres of water piping beneath the road to improve the area’s water drainage system. Two road lanes have been closed as work continues leaving two other lanes open for drivers.

Residents reported that the road was dangerous at night, even before the construction project started because the road is dark and there is little lighting. Residents added there have been many deadly accidents caused as a consequence.

The Director of the Office of Highways No.12, Jirawat Songpasook, reported to the media that the project is expected to finish next month.

Jirawat added the project would be useful and help reduce flooding on the road.

The return of the most important coffee event in Thailand