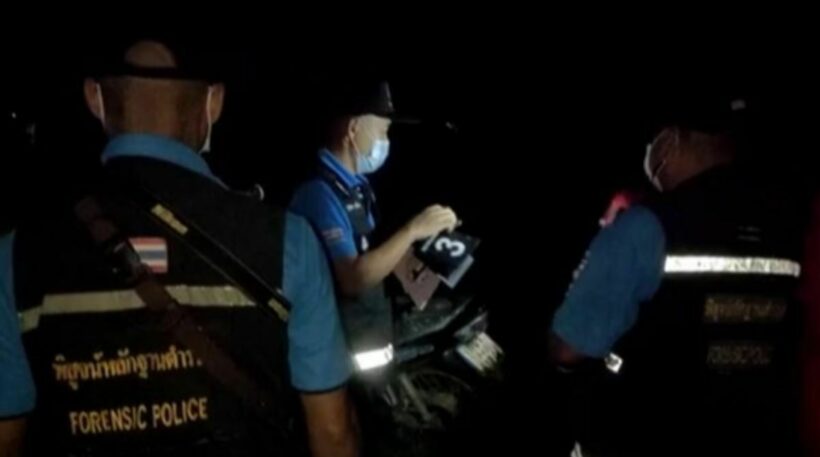 A man stabbed his wife’s suspected secret lover to death in a rice field last night in In Buri district in the central province of Sing Buri. Police are still tracking down the assailant, who fled the scene on a motorbike.

At 9.55pm, officers from In Buri Police Station went to investigate after they received a report that two men were loudly arguing at a rice paddy in Ngew Rai subdistrict.

Upon arrival, police found the body of 51 year old Champa Nopparat lying on his side the rice field, muddy and covered in blood, about 500 metres away from the road.

Police say Champa was stabbed eight times with a “sharp knife-like object” and found a sheath tossed in the grass near Champa’s body.

Champa’s blue Yamaha Spark Nano motorbike was found parked on the road. Strangely, police found a bag containing a dead cobra in the basket on the front of the motorbike.

A witness told police that he was burning charcoal near the scene of the incident when “Mr. A” came to ask him where Champa was at about 9.30pm. The witness said he told Mr. A he had seen Champa leave the area on his motorbike.

The witness said he shouted to Champa, but heard no response. The witness feared the worst, and was too scared to look, so he called the police to the scene who found Champa lying dead in the rice paddy.

The police’s initial investigation reveals that Mr. A suspected that Champa was having an affair with his wife, so he brought a knife and stabbed him to death, said police.

Police don’t know where Mr. A is, but said he will prosecuted according to the law once he is tracked down.