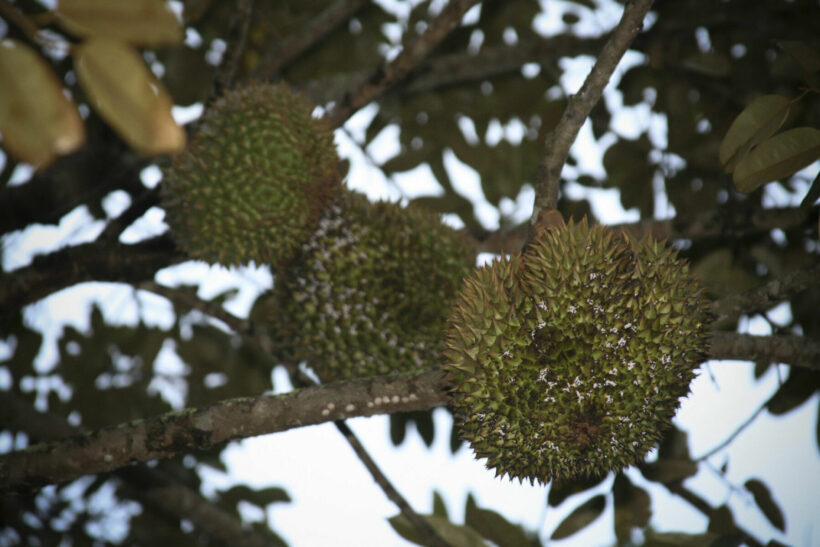 After filing a police report in Samut Sakhon, a central Thai province, a 55 year old man hopes to warn others of the perils of buying durian online. The man had attempted to buy “volcano durian” through an online dealer, but after sending the durian dealer money, the seller allegedly vanished.

Busamat, the would be durian buyer, says he wanted to eat the special durian himself as well as giving some to friends and family.

Busamat had located the Duian dealer on Facebook. The seller called himself “Mai Kongnil”. Mai said he had durian farm in the Rayong Province. Busamat felt it was a credible story and ordered durian and longan fruit. The bill came to 4,300 baht. Mai provided a bank account number and Busamat sent the money.

Mai said the durian would arrive in 2 days.

However, Busamat’s attempts to contact Mai after the bill was paid went unanswered. Busamat alleges Mai removed his Facebook account. This was when Busamat knew no Durian was coming. He was an (alleged) victim of durian scamming.

Busamat believes he will not be reimbursed for the durian not materializing. His hope is that others will not fall prey to the siren call of volcano durian. Also, the police will catch the alleged scammer.

Currently, police have issued an arrest warrant for the duplicitous durian scammer who calls themselves “Mai Kongnil”.

Further information will be given on the case as it comes in.

Last week, other alleged criminals who couldn’t resist durian were arrested trying to smuggle the fruit across the border from Myanmar.