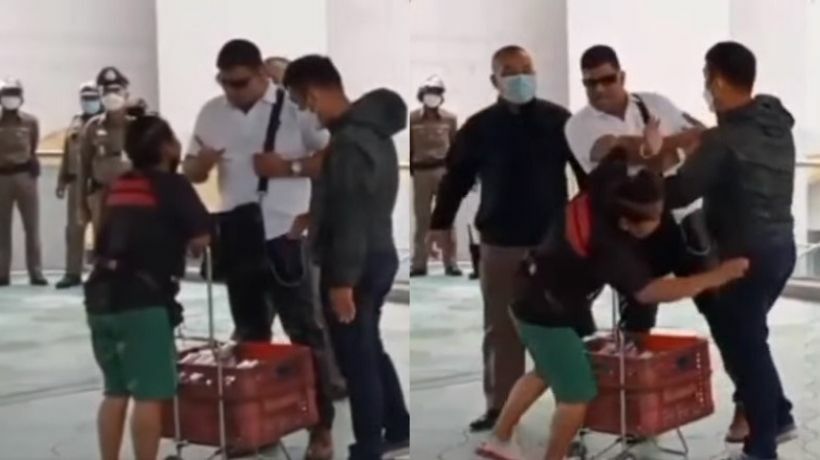 A man who made headlines two months ago for releasing cobras and cutting his wrists at a busy intersection in Bangkok has gained more attention for slapping a political activist in the face at a protest in Bangkok. ‘K Hundred Million’, a real estate businessman, said he slapped the woman because she insulted Thailand’s royal family. The incident happened on the skywalk outside the MBK centre.

Last time, 46 year old K Hundred Million, or Kanetpisanuthep Jakapopmadadecha, performed a ritual-like outside Central World. He parked his red Mercedes Benz in the middle of the road, stopping the traffic, tossed flowers on his car, cut his arms with a knife and then poured his blood and red syrup onto the floor. He was shouting something about the nation and something about Siam Devadhiraj, who Thais believe to be a guardian of the country. Later, he fled to India where he apparently caused “chaos” in Mumbai. He was arrested at Suvarnabhumi airport when he got back. Then he posted on Facebook saying he was not sorry for what he had done.

Yesterday, K Hundred Million slapped 67 year old Wan “Pao” Sae-ang, a well-known Thai activist, in the face. Pao is a merchant but also an activist and is often at the forefront of many political protests that happen in Bangkok. Yesterday, the political activist news page Ratsadon News posted a video of the incident on Facebook. In the video, Pao can be seen standing with her cart on the MBK skywalk. Then, K Hundred Million walks up to her, points at her, and slaps her in the face so hard that she falls to the floor. Many people witnessed the incident and police officers were already present at the scene.

After that, the protestors who saw tried to attack K Hundred Million. The police got the situation under control and took the man to Pathumwan Police Station. Superintendent Pansa Amarapitak said the man was charged for the attack and could face more charges if Pao is badly injured. His request to get out on bail was rejected.

Pansa said the police are aware of K Hundred Million’s mental health problems and know he has received treatment for them at Somdej Chaophraya Hospital in the past. He said justice would be served for the victim.