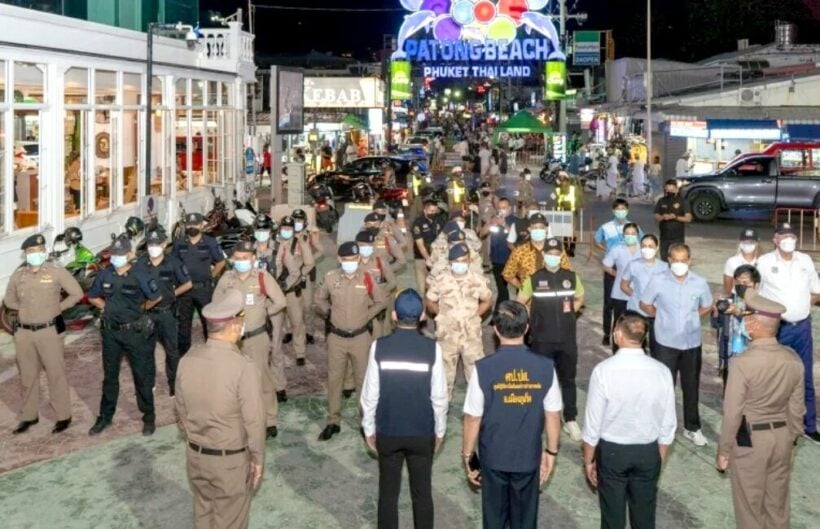 Strong punishment is written into the laws for violating Covid-19 rules laid out in the Emergency Decree and the Communicable Diseases Act, but they have rarely been enforced. So when it was announced that Phuket Police would be cracking down on foreigners not wearing masks, many questioned whether any action would be taken. But last night, police began enforcing the mask rules on the popular tourist street Bangla Road and around Phuket Town.

Health officers, and other officers from Patong municipality and the Patong Police, along with the special appearance from the Mayor of Patong and the Vice Governor of Phuket, started patrolling the streets at 7 pm to warn people about the need to wear their masks in public.

The enforcement was soft though, with no fines or punishments being imposed yet, only a campaign to raise awareness about the law. Officers made a point to talk with business operators, staff on Bangla Road, and the tourists wandering around the area, informing them of the rules and the need to wear masks in public.

The Patong Police chief said that they had received reports that some tourists aren’t following the mask rules and other public health and safety measures, and warned that it could lead to the rapid spreading of the Omicron variant.

The report issued after the patrol warned that people disobeying the Covid-19 rules face a fine of up to 20,000 baht, though the CCSA had set a maximum fine of 1000 baht for not wearing a mask in a public area.

Officials and police in Phuket Town ran a similar public awareness campaign, with the Phuket Town Mayor and the Phuket Provincial Chief Administrative Officer leading a march down the roads of Old Town. They were joined by public health officials, military, and police officers as they travelled along Phang Nga Road, Ranong Road, Thalang Road, and Yaowarat Road to speak with tourists and local residents about the importance of wearing a mask.

They said that most tourists wore masks but there are still some that don’t. The mayor pointed out that the governor has already had meetings with foreign consuls in Phuket, asking them to tell their citizens to mask up, and also asked hotel operators to be vigilant in enforcing mask laws.

Officials say that after today’s visibility campaigns, patrols will be rolled out across the island, especially at tourist attractions, where they intend to enforce the laws that require that masks be worn in public to reduce the spread of Covid-19 in Phuket.