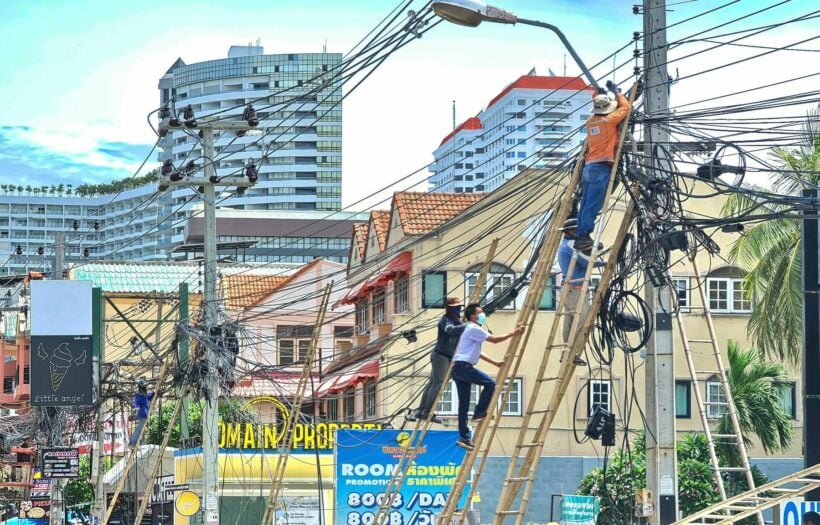 The Pattaya Mayor yesterday took a big step in delivering one of his election promises “to make the city more beautiful to tourists from all over the world” by ridding the resort of its ugly communication cables.

Tons of dead communication wires, on the road along Jon Tien Beach in Pattaya that had been left dormant for years, were removed yesterday allowing tourists to see a bright blue, beautiful sky for a change.

Pattaya authorities joined hands with Provincial Electricity Authorities and communication business operators throughout the city to tidy up the cable wires, most of which were useless and broken.

The Pattaya Mayor, Porramet Ngampichate, who won election to office earlier this year, emphasised that he wanted to make Pattaya clean, tidy, and beautiful to welcome tourists from all over the world after the Covid-19 situation gets better. He made the messy communication wires one of his priorities.

If Pattaya can succeed in transferring overhead cables underground, why can’t Bangkok and other provinces pay more attention to their messy communication and electrical wires? Had they done so lives would have been saved at Sampeng Market near Bangkok’s Chinatown two weeks ago. Two people died and 11 were injured as a result of cables starting the blaze which caused fatalities.

A project to move power and communication wires underground isn’t new in Thailand. In 1984 a project in Bangkok was originally started but astonishingly it is still ongoing. Only 48.6 kilometres of that 236.1 kilometres of cables target has been completed in 38 years. A shameful statistic that has cost the lives of many.

Authorities have promised the project in Bangkok, and nearby provinces including Samut Prakarn and Nonthaburi, is expected to be completed by the end of 2024. It remains to be seen.

What are transfer fees in Thailand property purchase and who pays them?

Migrant workers – even undocumented – can stay until 2025