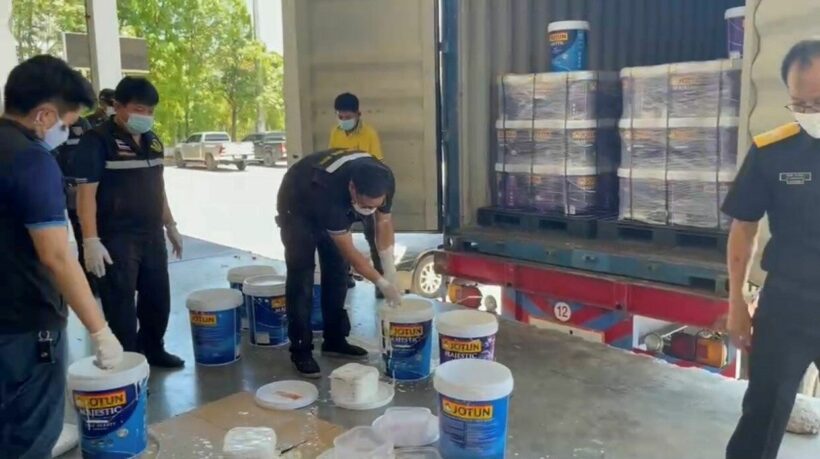 Two Australian men who allegedly conspired to smuggle more than 300 kilograms of heroin from Thailand to their home country were recently arrested by Australian Federal Police. AFP say one of the suspects is “one of the nation’s most significant organised crime threats” and is designated as an Australian Priority Organisation Target, or APOT.

Back in July, Thai customs officials at a port in Chon Buri searched an outgoing sea cargo container destined for Queensland and found 314 kilograms of heroin hidden in paint drums. Following the drug seizure, Thailand’s Office of the Narcotics Control Board announced that Thai authorities contacted the Australia Embassy and planned to investigate the network behind the operation.

Thai authorities cracked down on illegal drug exports after the May drug bust in Australia, where more than 300 kilograms of methamphetamine were found on a Thai cargo ship docked in Sydney. Over the summer, Thai authorities reported numerous drug seizures involving outgoing shipments at the Chon Buri port and at Bangkok’s Suvarnabhumi International Airport.

The AFP recently announced the arrest of two Sydney men who allegedly arranged the import of heroin from Thailand in July. Police say a 38 year old man, who is designated as a priority target, allegedly conspired with a 41 year old man using encrypted communication platforms, including AN0M, which poses as a secure messaging app, but is actually run by AFP and law enforcement agencies in other countries.

Both men are charged with conspiring to import into Australia, a commercial quantity of a border controlled drug, which carries a maximum penalty of life imprisonment. The 38 year old faces additional charges of possession of MDMA, unauthorised possession of prohibited weapons and failure to comply with a court order.

“Transnational serious organised crime continues to attempt to send heroin through our borders to make money off the misery they peddle. The AFP and its law enforcement partners in Australia and overseas will continue to disrupt the activities of criminal groups acting across international borders, and protect our community from these harmful substances.”