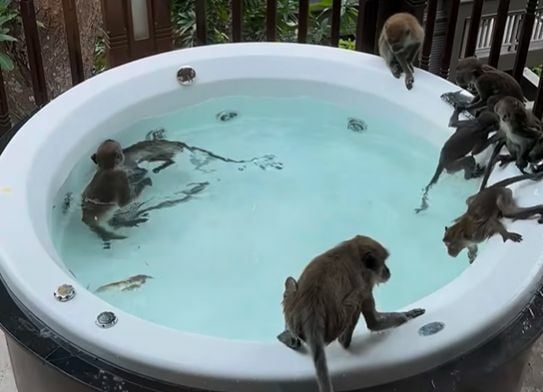 A couple were excited for a two night getaway to a luxury resort in Krabi with a sea view room and a private hot tub. But when they arrived, it turned out the hot tub was more communal than they thought. In a video posted on Facebook, a group of monkeys can be seen having the time of their lives, diving into the steamy hot tub, swimming under the water, and jumping in from high up in a nearby tree.

The couple didn’t mind that the monkeys stole their hot tub to have a party. They said the monkeys gave the resort a natural feel and a good atmosphere. Then, in the early hours of the morning, they were awoken by a loud noise, similar to glass smashing. They discovered a huge crack in their window and suspected a monkey had something to do with it. But, they moved rooms and there were no problems.

As part of the package, the hotel arranged a boat trip to Koh Phi Phi and Maya Bay for the couple. The couple were given a voucher to hand in to the boat operator. They waited by the pier at 9am, as requested, handed in their voucher and got on the boat.

The voucher said food and drinks were included, but when they got on the boat, there wasn’t any food or drinks at all. The couple didn’t mind that much because it was their first time visiting Krabi and they were happy to be on a boat trip. They did think it was strange that they were the only 2 people on the long-tail boat, but they appreciated the privacy anyway.

Much to their dismay, the couple were met with a 6000 baht bill when they returned from the boat trip. The hotel said the couple got on the wrong boat, and needed to pay for the trip they went on.

The couple said the man took their voucher and asked them to get on the boat, and they waited in the exact spot as instructed by the hotel at the right time. They didn’t understand how they had got on the wrong boat. By this point, they were hungry because the food they were promised in the morning never materialised.

After a long time going back and forth, the hotel accepted responsibility and said the couple didn’t have to pay the bill. They also said they would give the couple a free meal because they hadn’t eaten all day.

But, the couple had wasted most of the second day of the trip arguing with hotel staff, which they said ruined their trip. Turns out the monkey hot tub party was the best part.

Islands in Krabi to temporarily close for restoration

Carnival in Pattaya coming up next week