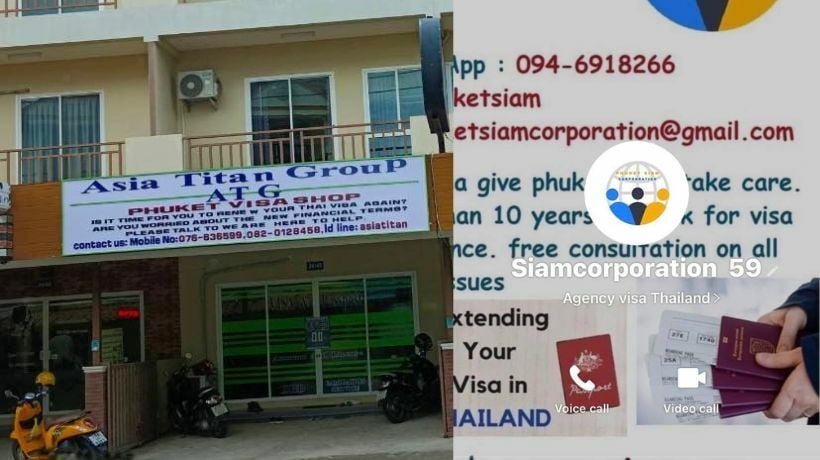 More than 100 foreigners in Phuket enlisted the help of a non-profit organization and a class action lawyer after they were swindled out of thousands of baht by visa agents.

Asia Titan Group ATG, and Phuket Siam Corporation Service, are 2 of the visa agencies named by foreigners who were lured into handing over cash for a visa extension. The travellers later found out the agencies had scarpered with the money and their status showed they had overstayed their welcome.

The non-profit organisation, Help Crime Victim Club, on Sunday poked fun at the Phuket police on its Facebook page for its lack of action in trying to catch the crooks.

“Where were Phuket police? The foreign victims filed complaints, but you just ignored them. You will never move your ass if the media didn’t cover it, right?”

The Help Crime Victim Club reported that the status of all foreigners in the group showed they had overstayed. The tourists who overstayed by less than 90 days were lucky and could still process a visa extension by themselves. But there were some foreigners who had overstayed the 90 days. They admitted they are scared to report to the police.

The victims met yesterday and launched a class-action lawsuit against the fraudulent visa agencies. During the meeting, they appointed a lawyer to represent them, where they discovered they weren’t the only foreigners being scammed. Other victims had reported similar stories about visa scams from around Thailand.

The Superintendent of Mueng Phuket Police Station, Sarawut Chooprasit, informed the media yesterday that they were investigating the case. He added there was more than one visa agency involved in the case and if evidence proved the agencies intentionally swindled money from foreigners, those agencies would be charged with the Offences of Cheating Fraud.

Sarawut insisted foreigners follow up visa extensions themselves and those who had been in the country less than 90 days to go to the immigration office.

The Director of the Phuket Immigration Office, Thanes Sookchai, urged victims to report their status to the officers. Thanes insisted that those who overstayed wouldn’t be arrested. The officers would deal with them one by one according to their problems.