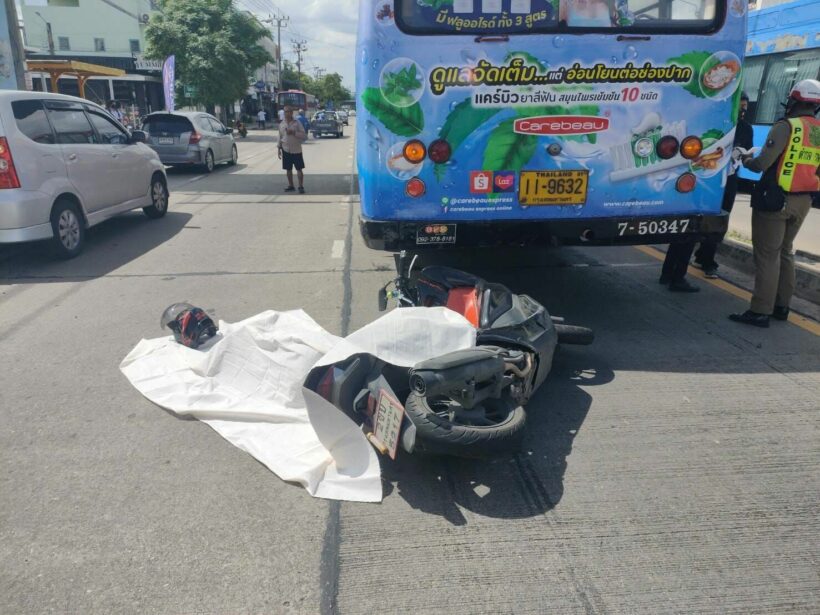 A motorcycle rider died yesterday in a multi-vehicle pile-up in Nonthaburi province near Bangkok.

Four vehicles were involved in the accident, including two motorbikes, two public buses, and a sedan car.

The accident happened because a motorbike suddenly broke to allow an elderly person to cross the road, beneath a pedestrian overpass on Pibulsomgklam Road in the Mueng district of Nonthaburi province.

CCTV cameras and witnesses in the area revealed the elderly man crossing the road under the overpass, making the motorcycle rider stop suddenly. A sedan car following the motorbike couldn’t stop in time and hit the back of the bike projecting it and the rider forward.

Fortunately, the motorcycle rider was unharmed but a worse was to follow.

Officers from Mueng Nonthaburi Police Station gathered evidence from the scene and invited each driver to the police station for questioning. Police have not prosecuted anyone at the moment.

Thai netizens expressed it was hard to blame anyone. Some pointed out that a pedestrian overpass is a safe way to cross the road, but elderly people and people with disabilities find it difficult to climb the stairs.

Many others blamed officials saying they only think about drivers, not pedestrians. Some said that if the first motorbike didn’t stop for the old man to cross the road there still would have been an accident and the death, of the old man.

Hong Kong man goes to Thailand to meet ‘lover’, gets trafficked to Myanmar