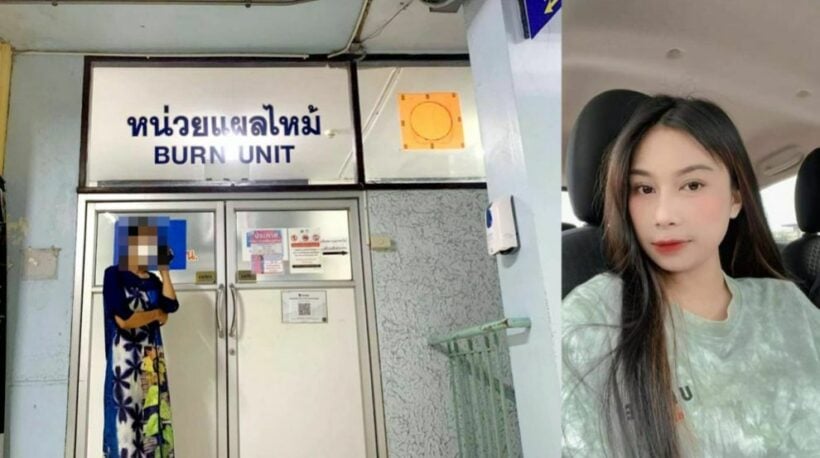 A 23 year old woman injured in the Mountain B nightclub fire in Chon Buri’s Sattahip district on August 5 passed away at Chon Buri hospital at 2:50am today. The fire has now claimed 19 lives and 26 people are still receiving treatment in hospital.

“Ice” went to Mountain B with her boyfriend, 30 year old Chatchai “Im” Chuenkha, who worked as a singer in the nightclub. Im died on the night of the fire. The couple have left behind a 5 year old daughter.

The young woman received one night of treatment at Queen Sirikit Hospital in Sattahip before being transferred to Chon Buri hospital. Throughout her treatment, Ice breathed with the help of a ventilator.

Ice suffered burns on “100% of her body”, which was wrapped head to toe in gauze. Ice’s situation gradually declined and in the end she died from blood poisoning and shock, said the hospital.

“Even with one billion baht, without a daughter to help spend it, Mom will not find happiness. The only thing I wish for in this life is to have my daughter, the happiest thing in my life.”

Weena added that her 5 year old granddaughter Mona keeps asking when she will see her mother, which Weena described as “causing torture in her heart.”

Ice’s mother initially received 10,000 baht in compensation. She requested an extra 30,000 baht to help with her travelling to and from the hospital and for supplies for Mona. However, she was instead given an extra 10,000 baht, receiving 20,000 baht in total (US$563). Weena said the family is in big trouble now, and has no savings for Ice’s funeral.

Weena said she will file a lawsuit for damages to restore justice for her daughter Ice.

The news comes just days after a 17 year old girl injured in the fire died from her injuries in hospital.

On the night of the fire, 13 people died, and five more have since died in hospital. A total of 26 people injured in the fire are still in hospital, many with severe burns and breathing with the use of ventilators.

4am alcohol curfew may increase revenue, but also crime, deaths