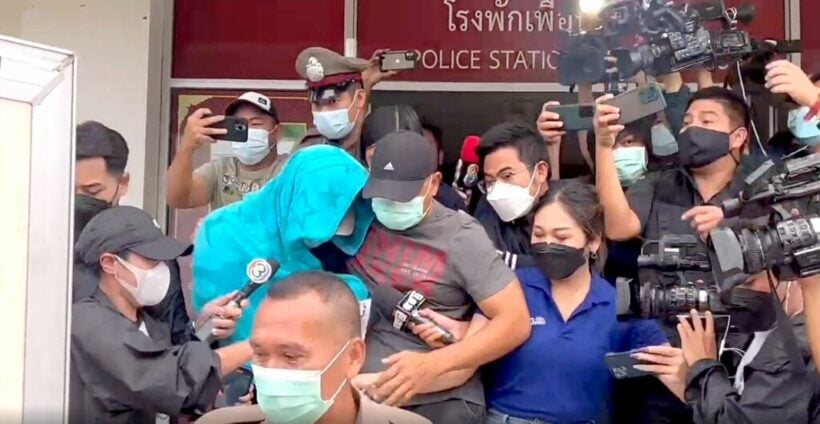 As more details emerge on the horrific fire at the Mountain B Pub that took the lives of 15 victims with 38 more hospitalised, The Thaiger continues daily roundups of new developments. Yesterday’s can be found here (about the victims and owners) and here (about response from authorities). Read on to learn about authorities’ actions regarding the owner, other club inspections, and a viral moment, or click here to read about the construction issues and inspections.

Meanwhile, the owner of Mountain B Pub was taken into custody after surrendering to police and faces charges of negligence that caused death for the fire incident. Police vowed to review the Building Control Act and all related laws and add further charges if any were applicable.

Brief rumours circulated that the owner, nicknamed Sia B, was actually a proxy owner, and that perhaps government officials had involvement or vested interest in the venue. Some alleged that Sia B was a stand-in and not the real owner, but the Chief of the Chon Buri Police said it was Sia B that made the modifications and requested licenses for the club, having been involved in the project since the beginning of construction.

While it was believed that the Pattaya Court would extend the owner’s time in police custody, with a 12 day extension granted through the 19th, but he was freed this afternoon on 300,000 baht bail. Sia B was released on the condition he must wear a electronic monitoring bracelet, must not tamper with the evidence “or cause any other mischief.”

In Bangkok, 20% of 400 entertainment venues inspected did not pass and were ordered to close. Authorities expect many more improper venues to be shut in the coming weeks as inspections are being called for in all 50 of Bangkok’s districts. 49 of the 83 pubs shut so far in Bangkok are located in the Chatuchak area, where Bangkok Governor Chadchart Sittipunt says a disproportionate amount of entertainment venues were built below standard.

Every month on the 5th, safety check reports are turned in to Chadchart, and he is following up to see how many of the 83 venues have made improvements. Police are working closely with the Bangkok Metropolitan Administration to keep venues safe in the capital city. Jurisdiction is a bit sporadic, with Metropolitan Police issuing and renewing licenses for pubs, but the BMA is able to inspect music and food under the Public Health Act.

Finally, social media has been harshly criticising the police for diverting any attention from the bigger matters of club safety, owner responsibility, and further investigations in order to question a man who was captured in a photo that went viral from the tragedy.

The photo, taken just outside the club while people fled for their lives, showed a 22 year old man running out of the club gripping a bottle of alcohol and an ice bucket as if saving his booze stash was the biggest priority as the club became a deadly inferno.

Police called the man in for interrogation after the photo gained attention online. In his questioning, the man said it was not a comical moment, but rather a panicked reflex. He said he was with his friends inside Mountain B Pub and saw the fire above the stage. Overcome with terror, the man blindly lunged to grab whatever he could and flee for his life. He said he saw customers trying to get fire extinguishers and fight the flames but they were overwhelmed quickly.

It was only after he had gotten outside to safety and regained his composure a bit that he realized that he was clutching such a flippant souvenir – the ice and liquor from his table.

Police were criticised for their scrutiny of the man, though he was lucky to survive. When they began pulling charred bodies out of the remains of Mountain B, four were found nearly escaped, by the front door. Another five were in the cashier’s booth and one more in the DJ booth. Three more bodies were found in the men’s room of the venue.

[To read about the construction issues and inspections, click here.]