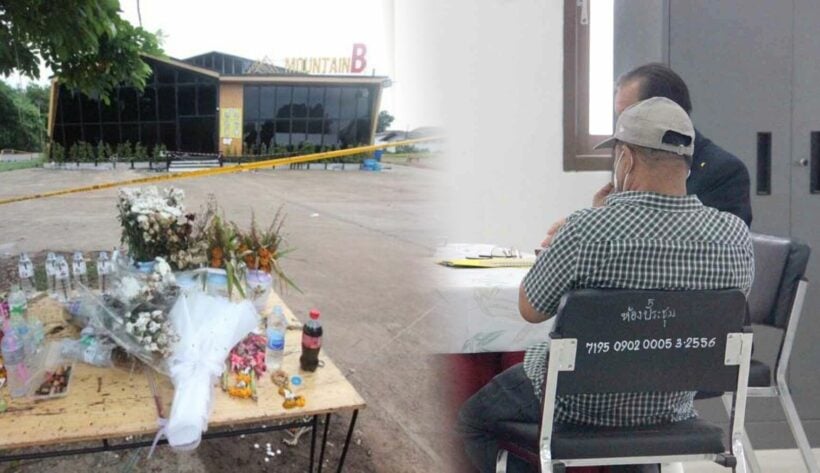 The presumed real owner of the Mountain B Pub where a horrific fire with a death toll that has now hit 19 people has now turned himself in. Somyos Panprasong, now considered to be the actual owner of Mountain B Pub after his son Sia B surrendered to police in the wake of the fire, reported to the Phlu Ta Lung Police Station today and was placed under arrest.

The 55 year old man had a warrant issued by the Pattaya Court for his arrest yesterday after police gathered evidence that his son Sia B, who was released from prison on 300,00 baht bail, was running the club, but Somyos was a primary investor and the real owner of the illegally operating club that became a fiery deathtrap on August 5.

Somyos surrendered to the police in Sattahip district of Chon Buri at around 10 am, accompanied by his lawyer, and was immediately charged with causing deaths and injuries, recklessness, and opening and operating an entertainment venue illegally. Police are holding him and questioning and he initially denied the charges against him.

Police executed a search warrant at his house in Soi Thamwithaya 1 in tambon Sattahip earlier this morning, amid conflicting rumours that he either planned to turn himself in or potentially flee the country as social media chatter suggested. More than 10 officers from the Chon Buri Provincial Police went on that search warrant for the man that could possibly be a flight risk.

Meanwhile, its been 12 days since the blaze started in the soundproofing foam ceiling tiles of Mountain B Pub and quickly engulfed the roof of the club, killing 13 on the spot and six more who succumbed to their burn injuries in the hospital, including a 23 year old yesterday and a 17 year old two days before. Police are still stationed at the burned-out club, keeping a watchful eye on security as forensic investigations continue.

Officers have been standing guard at the site of the tragedy 24 hours a day, seven days a week since the incident, with three officers seen standing guard today. They are maintaining the integrity of the active investigation scene, making sure no one goes in or out or moves anything around inside, disturbing possible evidence or tampering with a crime scene.

An engineering team is still planning to come to do a thorough investigation of the venue before announcing the final cause of the deadly fire.