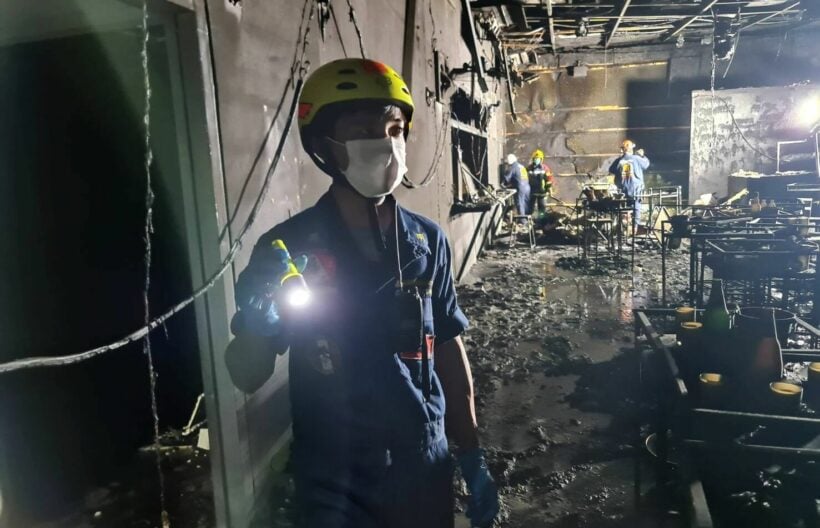 In the past 24 hours, many updates have been revealed regarding the horrific and tragic fire that engulfed the roof of the Mountain B nightclub in Pattaya suburb Sattahip which has now claimed the lives of 15 victims with 38 more injured.

Latest reports say that sparks lit the soundproofing foam in seconds after two loud explosions near the DJ booth, and the inferno spread quickly across the highly flammable foam. The live music stopped and people stampeded for the door. The spark may have been from overheated fibre-optic cables, initial investigations report.

Read on for details about the fire victims and owners, then click here for updates on police response to the catastrophe.

One more person trapped in the nightclub fire died of his injuries yesterday, bringing the total death toll to 15 victims. The 30 year old man had been part of a group at the club that night celebrating his birthday. Two other members of the group were trapped in the fire and perished as they had reserved a table right by the stage making it difficult to get to the one accessible exit.

Buddhist monks came to the burned-out pub with friends and families of those lost in the fire to perform religious rites for the dead.

Many have reported outrage at the silence of the owners of Mountain B and the top management, lambasting them for not reaching out to victims and family members of those who died in the fire. Warrants were issued by the Pattaya Provincial Court for the arrest of the owner and those involved in the fire after Sattahip district officials and Chon Buri’s Provincial Disaster Prevention and Mitigation Office went on an evidence-gathering inspection to the remains of the building yesterday morning.

The 28 year old owner then turned himself in at the police station where he will face charges of reckless behaviour causing death and operating a nightclub without a license. He will appear in court tomorrow and is being held without bail, though he plans on requesting a one million baht bail, citing the fact that he turned himself in so is not a flight risk.

The owner vowed, through his lawyer, to provide an additional 10,000 baht compensation per person injured and 50,000 baht per person who died. His lawyer said that the owner is in mourning for the victims of the fire and in a difficult mental state.

Some who escaped the fire gave statements at the Phlu Ta Luang Police station. Authorities vowed to hold every person that was responsible for the tragic fire responsible and prosecute them fully and publicly.

VICTIMS INSURED BUT CLUB WAS NOT

Mountain B had only been open about a month before the incident and had quickly become a hotspot for young locals. The Secretary-General of the Office of Insurance Commission says that the new club did not carry any fire insurance to protect the 552 square metre building.

“Entertainment venues are expected to be insured against fire and other damages and should also be insured for liability to third parties.”

The OIC helps provide victims with compensation, and a makeshift centre at the Phlu Ta Luang Subdistrict Administration Office has been launched in addition to the Chon Buri Office to work with insurance companies on payouts. Anyone involved in the fire and not yet in contact is advised to call 1186 to reach the OIC hotline.

Four of the victims who died in the fire had life insurance policies that will pay out a total of 4.76 million baht. An additional 14 of the 38 injured were carrying accident coverage that insures a total of nearly 13 million baht.

[Continue reading updates about the Mountain B pub fire here.]