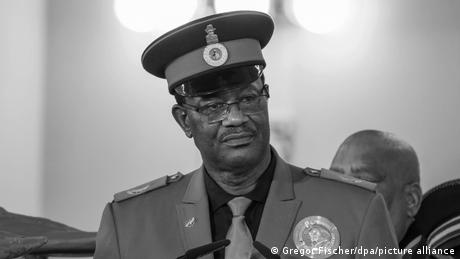 Vekuii Reinhard Rukoro was born in Otjiwarongo, a farming town in central Namibia — then known as South West Africa — in 1954, a decade before the beginning of the armed struggle to rid Namibia of South Africa’s apartheid regime.

He attended secondary school in Döbra, then a tiny settlement north of Windhoek before training to be a lawyer, first in Windhoek and then in the United Kingdom, where he earned a Law degree from the University of Warwick in 1983.

Rukoro’s career points to that of an ambitious man, determined to escape the restrictive apartheid rules that hindered Black people in Namibia during the 1970s and ’80s. Rukoro was also a keen boxer and athlete, playing rugby and football in his younger days.

Rukoro joined the South West African National Union (SWANU) in the 1970s, a group that then included many ethnic Herero people. He had spells as secretary-general before becoming the party’s president in 1989.

Rukoro therefore took up a seat in the Constituent Assembly, where he became one of the leading drafters of Namibia’s brand new constitution.

Politically, Rukoro switched allegience to the ruling South West African Peoples’ Organisation (SWAPO) in the mid-1990s, and the lawyer served as the country’s attorney general until 2000, before pursuing a business career.

Rukoro was an influential businessman after his political career went on hold, such as being chairman of the former national carrier, Air Namibia until 2004, while also holding senior leadership positions at banking institutions Sanlam Namibia and First National Bank Namibia.

Rukoro was also CEO of the influential Meat Cooperation of Namibia (Meatco) organization, but his relationship with the company became increasingly strained until he when he left in 2017.

Vekuii Rukoro rose to prominence when he took over the reign of Paramount Chief of the Hereros in 2014. While his position as the leader of the Hereros and the Ovaherero Traditional Authority has been routinely disputed by other Herero clan leaders, Rukoro was known for his uncompromising demands for justice with regard to the Herero and Nama genocide committed by German colonial forces in the early 1900s.

His red and gold embroided uniform, cane and hat became his trademark.

When negotiations between Namibia and Germany commenced in 2015 — with the aim of getting Germany to admit the early 20th century killings amounted to genocide and reach some kind of financial settlement — Rukoro consistently rejected Germany’s insistence on dealing bilaterally with the Namibian government instead of the affected ethnic groups, insisting on representation.

He demanded Germany pay reparations, and his prominence in Namibia with the Herero community, as well as an international profile gave him the platform to speak, often bluntly, on the subject.

On a visit to Germany in 2016, Rukoro said that a German apology not backed by reparations would be a an “insult to the intelligence not only of the Namibians and the descendents of the victim communities but to Africans in general.”

In 2017, Rukoro and other Herero and Nama leaders, controversially filed a class-action lawsuit in New York to try to force Germany to pay reparations, an effort which fell short when the court ruled the principle of sovereign immunity made the case against Germany inadmissible.

The traditional leader who just wouldn’t lie down

Still, Rukoro used his position as paramount chief to bring attention to the genocide case, remaining a thorn in the side for Germany. Rukoro, along with other traditional leaders, remained critical of the negotiations which came to a head in May 2021, with the German government recognizing colonial era killings as genocide, asking the descendants for forgiveness, and supplying Namibia with a total of €1.1 billion ($1.3 billion) over the next 30 years. Rukoro also called for protests against the planned visit by German President Frank-Walter Steinmeier to officially ask for forgiveness.

While he is mostly known outside of Namibia for his activism for Herero rights, Rukoro was an important, and influential, figure in Namibia’s early years as a democracy, and held important business portfolios.

Despite his critics and the controversies he courted, Rukoro’s outspokenness on the Herero and Nama genocide, and his profile as a Herero leader, was a reminder for international observers that the legacy of Namibia’s dark colonial past had never been fully dealt with.

Almost prophetically, Rukoro appealed to his Herero subjects in May to adhere to public health measures to stop COVID-19, warning families not to attend funerals en masse.

While Rukoro himself succumbed to the coronavirus, it’s hard to imagine Rukoro’s own funeral will not be generously attended, if not in actual numbers, certainly in spirit.

World Refugee Day: How a Pakistani risked everything to reach Europe