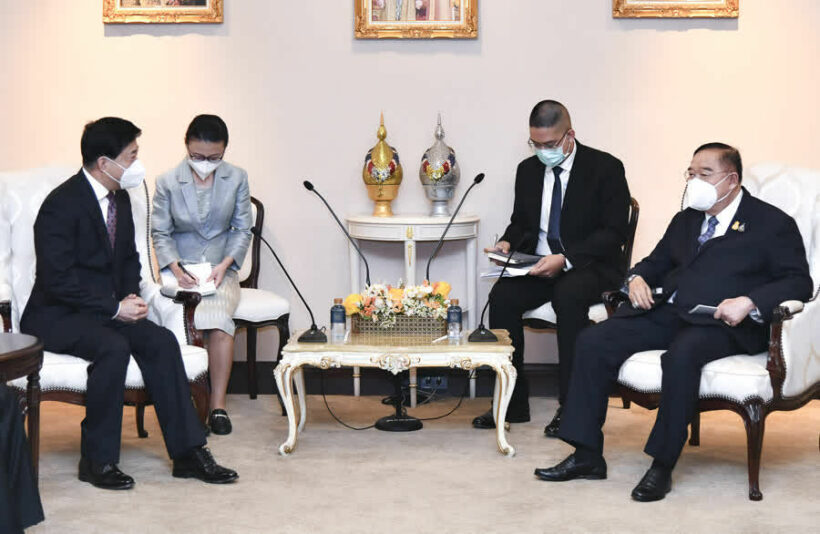 The meeting started with the Thai leader congratulating the new ambassador of China on his assumption of the job role. The main subject of their talks though was plans to expand cooperation between the 2 countries especially coming out of the prolonged Covid-19 pandemic.

The 2 discussed the Comprehensive Strategic Partnership that was created between China and Thailand in hopes of overcoming the pandemic and moving forward to the future. On a broader scale, the leaders also talked about the Asia-Pacific Economic Cooperation as Thailand takes over the leadership reins as this year’s chair of the organization.

Like a student inviting an absentee parent to their school’s open house night, Prawit eagerly expressed hope that China’s President Xi Jinping would attend this year’s APEC Summit that Thailand will host later in the year.

Then the Thai Deputy Prime Minister and the ambassador of China talked about a few smaller issues and details in relations between the two countries and projects they had collaborated on. Prawit thanked China, and especially the work of the Chinese Embassy in Bangkok, for facilitating a plan to allow international students to return back to China.

On behalf of the farmers of Thailand, the Deputy Prime Minister thanked China for the trust they have placed in Thailand’s crops as they continue to allow the import of fruit from the kingdom. The appreciation comes following an incident in August that led China to temporarily suspended all importation of longan fruit from Thailand amid fears of mealybug outbreaks.