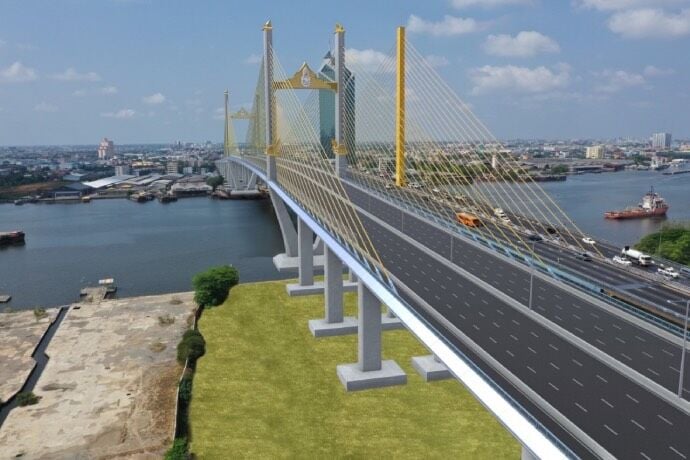 The Expressway Authority of Thailand has provided an update on the development of the newest and widest Chao Phraya cable-stayed bridge, saying the new bridge is expected to open for use sometime later this year. The department would ask HM King Vachiralongkorn to officiate at the opening and provide his auspicious name to the bridge, Rama 10.

EXAT says that the bridge is included in the Rama 3 – Dao Khanong – Outer Ring Road Expressway project. The bridge was constructed along the old Rama 9 bridge route to reduce traffic and offer more convenient routes for residents who travel from central Bangkok to the west side of Bangkok or suburbs. And if the Rama 9 bridge, which has already been operating for 35 years, has to close for maintenance, this new bridge could be the alternative route for Bangkok commuters.

The bridge will be the widest cable stay bridge in Thailand, featuring 8 lanes of traffic. EXAT also added that the strength testing performed with the full model of the bridge showed that it could withstand a typhoon/hurricane/cyclone with winds up to 270 kilometres per hour (happy to report nothing like that has ever hit Bangkok!).

The project is expected to be completed later this year (which probably means early next year) at a budget of about 6.6 billion baht.

Thai Coconut Milk Desserts U shouldn’t miss!! | This is Thailand